How to Suck at Your Religion (The Oatmeal) 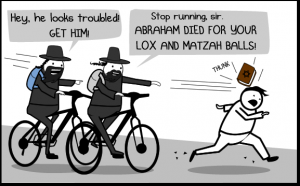 If you haven’t yet been to the website theoatmeal.com, you are seriously missing out on all sorts of cartoon-based hilarity. Matthew Inman, its creator, is a perfect example of an awkward person (the cute kind of awkward, for the record) who could have had a perfectly successful career in computer something-or-other, but chose instead to have a perfectly successful career drawing cats and making fun of Christian extremists.

Recently, he came out with the comic “How to suck at your religion,” which should delight Godless Liberals and Atheistic Deviants alike! (Also, those among us who are religious but aren’t totally crazy.) Perhaps next time, though, Inman could go a little harder on the Jews. Maybe Inman just hasn’t hung out in the right parts of Brooklyn? If he had, I’m sure he’d notice that there are those among The Tribe that are  every bit as crazy as those Christian and Scientologist extremists.

I mean, come on, Inman. What sane person thinks it’s a blessing to be part of a “Chosen People” who don’t let themselves eat bacon-wrapped scallops?