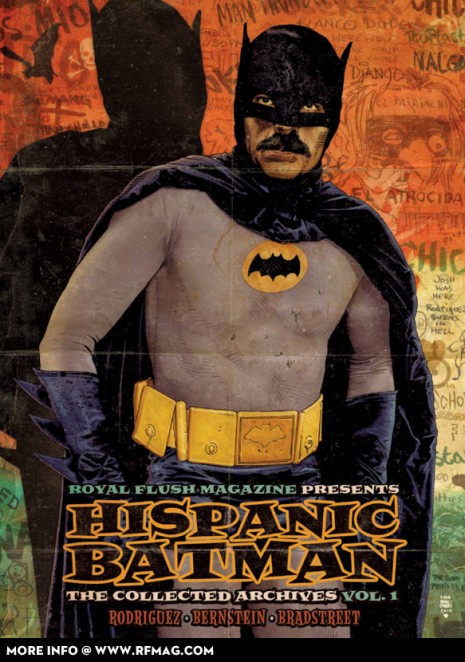 Royal Flush Magazine’s Hispanic Batman: The Collected Archives Vol. 1 features 10 adventures of the Latin dynamic duo ridding South Central Gotham of crime. The two fools fluctuate throughout the comics in weight and tooth size, respectively, brawl with the villainous likes of Hispanic Joker, Senor Que? and Dick Cheney. Erik Rodriguez and Josh Bernstein draw the different adventures in separate styles, some are more polished, like Y Tu Mama Tambien, while others offer a grittier, bile-rising vision, one must only look to Hispanic Robin’s protuberant nipples in Playboy Ha-fter Dark.

Outside of Hispanic Batman images so gross and pimple-covered can only be seen in old copies of Mad.

Besides the expected gluttony of Hispanic jokes (“Batman isn’t a white man at all—he’s a fucking beaner!”), Hispanic Batman also offers some yucks at Asians in Grande Trouble in Little China, in which (spoiler alert) Hispanic Robin blinds Henchmen Yao Ming with a piece of dental floss.

There are more corn-holin’ jokes in these comics than Stuff Tushies Hate would ever attempt. (Rodriguez and Bernstein are especially infatuated with the concept of Hispanic Batman plugging Hispanic Robin’s Batcave.)Luckily for the Rodriguez and Bernstein their brand of racism and homophobia is so over the top and gratuitous that it renders it inoffensive and enabling of a solid pantleg piss, mang.