At their core, Woody Allen’s films have always been examinations on the male/female dynamic – in sex, love, work, family, and beyond. His personal life and the troubling allegations therein notwithstanding, that a nebbishy yid like Woody could establish himself as something of a sex-symbol speaks volumes to his ability as a filmmaker and keen observer (if not outright manipulator) of the rapidly fluctuating nuances of gender politics in the late 20th century. At his best, Woody’s films were never so much about the relationship between a man and a woman as they were about the relationship between Man and Woman. So would happen if happen if the man who redefined masculinity for a generation of filmgoers were to suddenly become a woman?

That male-to-female reversal forms the basis for Shaina Feinberg’s new project “Woody, C’est Moi” (Woody, It’s Me) in which she and her Bankrukt Productions partners Chris Manley, Jeff Seal and Chris Roberti reimagine five of Woody’s most iconic scenes…with all the genders swapped (except for one instance in which Diane Keaton is simply played by a Vaudeville-era ventriloquist dummy. Go figure.)

We spoke to Shaina about the series in an email interview:

*****
Where did the idea for the gender-swapped Woody come from? Why him, and not, say, Charlton Heston or Jim Carey, etc?
Well, first I’ll say we chose Woody Allen because I grew up watching his movies and identifying with him, not his female characters. Because I’m a neurotic New York Jew, his character just felt close to home. And also, because of the scandal and the recent back and forth between him and the Farrows, we thought, how are we going to still love these movies and feel unsettled about this event? And to me, this was a way to do that. But, now I’d like to say that we don’t plan on stopping at Woody. It’d be awesome to recreate more scenes with the gender roles reversed. Probably never Charlton Heston though. My picks would be Mel Brooks, Peter Sellars, Brad Pitt. Those guys are more my speed. 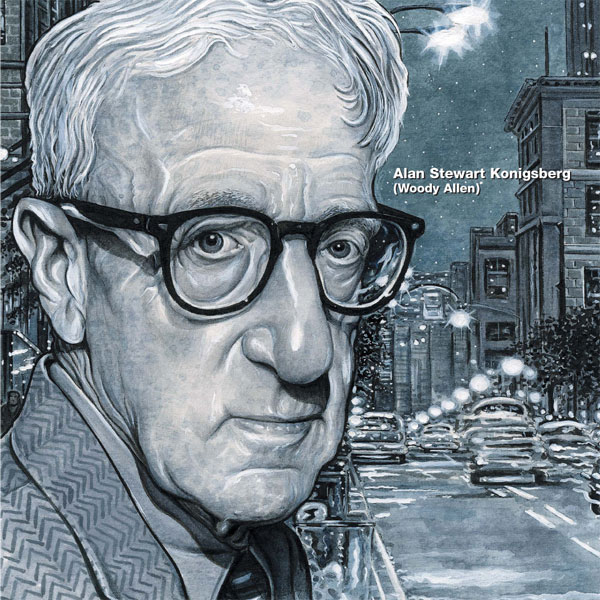 Okay, and why these five particular scenes?

We had about 15 scenes we wanted to recreate but budget and time only allowed for us to choose 5, for now. Those scenes were chosen either because they really highlighted the gender differences (like, in particular, Bogart and Therapy) or because they were iconic (in the case of Jew Eat or Easter). And, in the case of Jew Eat, I think it’s super neat to see these two women just walking and talking and calling each other out. The way women do. But in movies women aren’t usually portrayed like that. Like, in a movie about women, they’d probably have to be talking about shoes or boys, not about racism and paranoia.
What’s the reaction been like, thus far?
The people who’ve seen them (last week and today) have really liked them. I’ve gotten a lot of women being like, I totally relate to this! And we’ve had some guys offer to play women in our next batch. Someone said it reminded them of Julie Delpy’s Two Days in Paris movie because, essentially, she’s playing Woody Allen in that. Or, she’s getting to play a real neurotic woman. A smart, neurotic messy person.
And the takeaway from the experience has been..?
As filmmakers we learned a whole lot about technique. I mean, say what you will about Woody Allen, but some of those shots are complicated. Another takeaway was really just how much the male roles got to speak, how much more fun their roles are. I mean, that’s sort of what we knew when we set out to do it but it really became clear. For me, especially with the Bogart scene. When Jeff (who plays the woman in it) and I were doing that scene it was so obvious how sexist the original was. So, it’s eye opening to watch movies and be like, I totally relate to those male roles but they’re also really sexist. It’s all very messy. But it was a fun exercise and my team, Bankrukt Productions, is looking forward to unpacking this issue more.