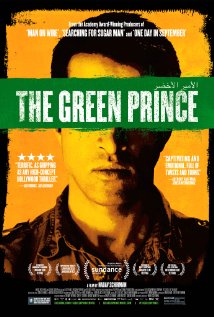 Jewdar is not, as a rule, a big fan of documentaries. By our reckoning, movies are for entertaining, books for educating, and ne’er the twain shall meet. On a rare occasion, however, that exception appears that not only proves the rule, but actually edutains. This year’s entry is most certainly The Green Prince, which tells the fascinating story of Mossab Hassan Yousef, son of one of Hamas’ founders, and for 10 years, perhaps the the Shin Bet’s most important secret asset. Recruited at 17 after his arrest, torture and coercion by the Israelis, Yousef became disenchanted with what he saw as the hypocrisy and self-destructiveness of Hamas. This internal transformation (as well as a secret conversion to Christianity, which the film doesn’t address) led him to embrace his work preventing Hamas bombings, not on behalf of Israel, per se, but on behalf of a shared humanity.

The film takes a fairly simple approach, with most of the talking being done by Yousef himself or his Shin Bet Handler, Gonen Ben Yitzhak. This allows for a remarkable view into the workings of both Hamas and Shin Bet, and into the mindset of those who work for them. Whether you’re interested in Israel, or just espionage in general, it’s a must-see.

If conflict is supposed to be essential for drama, this movie has it in spades–conflict between Israelis and Palestinians, between fathers and sons, between dueling world views, and with villains aplenty to go around. But the movie, in it’s own strange way, becomes a buddy-picture between Mossab and Gonen. Sure, Jewdar can’t help but feel that it’s inevitable that this will be remade as an absosmurfly unbearable comedy starring Chris Tucker, but for now, check out The Green Prince, and check your preconceptions at the door.

The Green Prince is currently at select theaters