The holidays are over. Most of us have just lived the sometimes frightening and always exhausting experience of being surrounded by our families, families who don’t always understand us but (hopefully) love us nonetheless. With the high of triumph at surviving another holiday season still lingering, now is a perfect time for Let My People Go! , a new French film opening this week in NYC.

The endearing comedy follows Reuben (Nicolas Maury), a French Jew who lives an idyllic life in Finland with his beautiful blonde boyfriend, delivering mail after abandoning his dreams of building a sauna empire. Thanks to a misunderstanding involving a heart attack and a package full of cash, the aforementioned blonde boyfriend kicks Reuben out, forcing him to return to France and his family: a traditional overbearing mother (Carmen Maura) and good-natured but adulterous father (Jean-François Stévenin). Throw in a lecherous old lawyer, a sister with a troubled marriage (to a goy) and a brother who can’t stand him and Reuben is quickly overwhelmed, especially with Passover only days away. Hilarity, naturally, ensues. 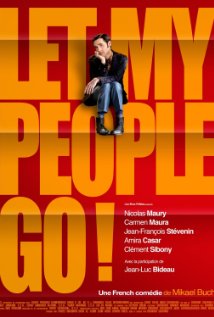 The film’s visual style and sense of whimsy are very reminiscent of Wes Anderson, especially in it’s lush, sepia-toned opening depiction of fairytale Finland and Reuben’s elaborate fantasy sequences. This is balanced by a distinctive sense of sharp, French humor and expansiveness. Director Mikael Buch coaxes broad performances from his actors that still manage to be extremely human and relatable, a particular feat in a foreign language film. Buch and his actors also have a talent for physical comedy, especially Nicolas Maury as Reuben. Maury vacillates perfectly between wan, heartbroken romantic and  anxiety-ridden neurotic (“I wish you wouldn’t make me relive my coming out every moment,” he tells his mother), with a wildly expressive face and endlessly contorting body. He and his on-screen parents and siblings do a fantastic job of portraying a family, one so seemingly real that they seem likely to murder each other at any moment. The script, a collaboration between Buch and Christope Honoré (Love Songs), is funny and touching enough to transcend language barriers and resonate with anyone, even if they’ve never had their mother tell them, “Everyone is gay until they meet the right person to marry.”

While Reuben’s sexuality provides the punchline for many jokes, this is not a “gay” film. It’s a film about a man dealing with his family and all of the issues that involves  and that man happens to be gay. It’s sad that this kind of storytelling seems so exotically European and almost unfathomable in America, where gay characters seem to always require storylines limited to bullying and promiscuity (to be fair, reuben experiences and engages in both, but they are merely plot points rather than important issues).

The best thing that this film does is remind us that our families may be many things: overdramatic, loud, abrasive, clueless and sometimes hurtful, but no matter what…they’re ours. When we need them the most, they’re there for us. It’s both a universal, as well as particularly Jewish, sentiment, and one that allows this film – like other “ethnic” comedies before it (My Big Fat Greek blah blah blah comes to mind…) – to be easily accessible to any audience.  Universally accessible or not, though, this film is decidedly Jewish, and its message of families coming together despite themselves should be instantly recognizable. After all, “If the Jewish people hadn’t gathered around Moses,” Reuben’s mother tells him, “the bible would just be the story of a bearded guy hiking in the desert.”

Let My People Go! (US release 2012, French Release 2011, Zeitgeist Films) opens in New York City on Jan. 11th, with a screening at Quad Cinema, held by the film’s director Mikael Buch. For more information on this, and other screenings, see here.