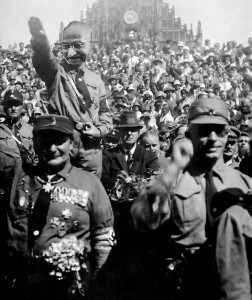 Bollywood is abuzz with gossip about a new movie set to begin filming in August.

The film will follow the last days of a man and his wife before they commit suicide. According to first-time director Rakesh Ranjan Kumar, it will try to explain the man’s personality, “his insecurities, his charisma and his paranoia.”

That man is Adolf Hitler.

Dear Friend Hitler, intended for international release, will follow the Nazi dictator and Eva Braun until their death in a Berlin bunker, according to the Guardian. Hitler will be played by Indian actor, Anupam Kher, and his Aryan bride will be played by former Miss India, Neha Dhupia.

In addition to the “When Adolf Met Eva” story, Friend is also about the larger relationship between Germany and India during the War. The title of the film comes from correspondences between Hitler and Gandhi in which the Mahatma referred to the Nazi leader as a “dear friend.”

As naive and misguided as the project sounds, there is a certain poetic justice of Hitler being memorialized by a decidedly un-Nordic Indian actor, I guess.