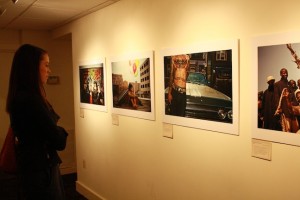 Who goes to shul on a Wednesday night?

Well a bunch of people did this week to see Joshua Cogan’s new photography exhibition at the Sixth and I Historic Synagogue in D.C.

Joshua Cogan’s exhibition, “Time Given,” records his journeys through life. Cogan uses his photographs, most of them portraits, to simultaneously talk about the subject and his own story. “Time Given” tracks Cogan’s travels through D.C., New Orleans, Jamaica and Southeast Asia.

This ramblin’ aspect of his photography is what attracted many people to the show.

Loren Streit, who works in public policy, explained that she came because some of her friends know Josh and the topic interested her.

Melissa Weiner also loved the international qualities of his photographs. Melissa (I’m deliberately not referring to her by her last name) met Josh when he had his first exhibition at Sixth and I a few years ago. For the past two years Melissa has been backpacking through Africa, East Asia, India and Hawaii, just getting back to Washington a few months ago.

“I see his photos and it makes me want to… go,” Melissa said, “It gives me wanderlust.”.

She loves his photos because they bring out in the subject an “I may be poor, but it’s beautiful” feeling, she explained to me.

Joe Levinson, who lives with Cogan, also loves the travel aspect of his work. “You can’t ask for a better roommate,” he joked.

But this wasn’t the draw for everyone.

“The ones from Singapore and Thailand mean less because they have no context for me,” Merav Fine explained. 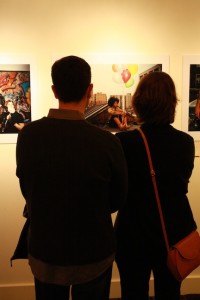 Her favorite was a portrait of John Waters who is shoplifting meat by putting it in a purse while a disappointed Santa Claus looks on. I wonder why she liked it so much.

Fine works at the nearby University of Maryland and said her initial attraction was the location—she goes to the synagogue for services and speakers frequently—and the fact that Cogan is Jewish.

“It’s kind of a support your people kind of thing,” Fine said. Fine explained that she does not normally come out to exhibition openings, but thought that his sounded cool.

Even though, Fine reflected, there are no overtly Jewish pictures that does not mean that they are not representative of the religion. “I think there’s something inherently Jewish about telling your personal story,” Fine said.

Annie Lumerman frequently sees the Jewish side of Cogan. Lumerman works at the Sixth and I synagogue as the director of Jewish programming and helped set up the exhibition.

His studio space is across the street so “he’s always in and out of the building,” she said. His photos are also always present. Several shots from a series he did on Ethiopian Jews that were a part of is last exhibition at the synagogue is always on display in the building

Lumerman remembers this past Purim when Cogan showed up for services in full shepherd attire. “You don’t think Josh Cogan will show up in a costume,” she said, “but Joshua Cogan shows up in costume.”

She added, “He just gets everyone going.”

Cogan’s exhibition will be on display through January 31, 2010.