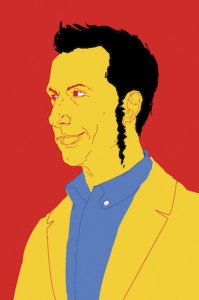 Elon Gold is a rare breed of showbiz Jew who can count on one hand the others that also observe the Sabbath. When shooting a TV series with Pamela Anderson he had to ask her to shoot their scenes on Thursday instead of Friday. Turned out Pam learned to dig Shabbat when she realized it meant an early start to the weekend. The shoot in question was also on Gold’s birthday, so as a special present for introducing her to Judaism’s perks, Pam bought him a stripper: ”I got you her for your birthday, and she’s Jewish,” said the generous Pam. Unfortunately, Elon already had a stripper at home, and four kids.

“If Jews controlled the media – wouldn’t I have a sitcom?”

Elon has tried his luck in the Hollywood game, gotten to “pilot” a few times on series he’s created, and still has more pokers in the fire. But his bread and butter since becoming a daddy has been an endless circuit of Jewish-themed charity events around the country where he’s honed his shtick.  “Comedians can’t turn off the observation deck – I lead a Jewish life, and I had no where else to take these observations.” On the Chabad telethon, Elon remembers: “There was only enough material for one hour, but we lasted eight (that was a miracle).”  The dancing Rabbi with the tote board tabulating donations sounds interesting, but Gold has no plans on developing a character based on those Lubavitcher jumping beans any time soon.

His new one-man show was originally produced for Montreal’s “Just for Laughs” comedy festival and it encapsulates and transcends the countless Hebrew Sick Benefit type gigs that speaks to a Jewish audience on a deep level. “Jews are the toughest audiences in the world – and I haven’t had one kvetch yet,” says Gold.

Why do you have to be so Jewish?

The Jew-ey-er you are, the better.

What do you say to those who think religion is not a laughing matter?

Funniest book in the world is the bible. Look at Jacob – his future father in law switched the sisters on him, and he didn’t notice – slept with the wrong one didn’t notice. How dark was it? Or was he just like – lemme see how the sister is – lemme try her out?

“1/2 Jewish, 1/2 very Jewish” comes to New York’s Gramercy Theater for a limited engagement starting on Dec 9th It will be the best way to celebrate the last night of Chanukah.