Crossfit Is Dumb. Crossfit At A Holocaust Memorial Is Even Dumber.

Here’s how it works: Instead of going to a gym, you go to something called a “box” (spoiler: it’s a gym) where, instead of jogging on a treadmill or lifting a few weights, you scramble to push your body to its physical limit, at which point you puke like a college freshman, and then do it all over again. Sure, it gets results (working out will do that, y’know) but it also engenders a whackadoo cult-like mentality among its adherents who are capable of working out every muscle in their body except the one that allows them to shut the fuck up about doing crossfit.

In any case, this Mountain Dew of a workout routine has a lot of die hard practitioners. Take, for example, Dave Driskell, a crossfit celebrity of sorts, whose 70k instagram followers are treated to pictures of Dave, well, doing crossfit and handstands and stuff.

Oh, and at the Holocaust Memorial in Berlin 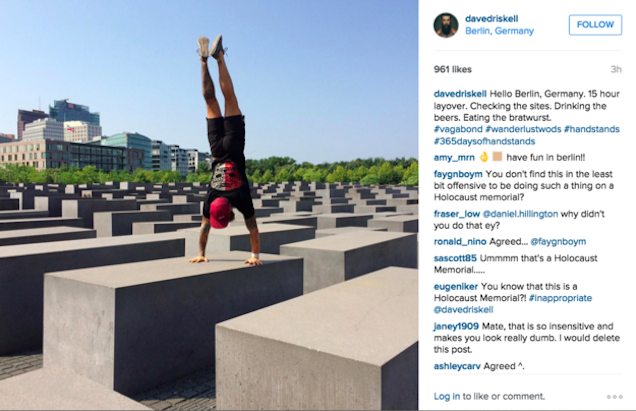 What a totally gnarly, and tubular dude!

Gawker points out that after being bombarded with “dude, what the fuck?” messages Driskell pulled the above pic, but not before it was screencapped for posterity. As his post points out, the holohandstand took place as part of a fifteen hour Berlin layover, during which Driskell did stuff like drink beer, eat bratwurst, and demonstrate off his physical fitness at a site commemorating the millions of deaths caused by the Nazis of the Third Reich. In fairness, Driskell is hardly the first person to, uh, not really “get” what the Berlin Holocaust Memorial is trying to convey. This is, keep in mind, the same site that inexplicably became a popular backdrop for users of the gay hookup app Grindr. It raises the question – Is there something about this particular Holocaust memorial that lends itself to, uh, unconventional visits?

Still, there’s a lesson to be learned here: While it’s good to work on your body from time to time, it’s probably best you give your brain some exercise, too.

Driskell has since issued a formal apology for his Holo-headstand. So, I guess we’re all good, Bruh.