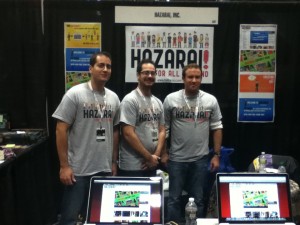 One is far more likely to encounter Japanese than Yiddish at Comic Con, so on Sunday, when Jewdar passed by the booth with the three guys hocking me to check out their product, we just figured that it was some anime fan site, or place for creepy guys to get their Asian schoolgirl fetish fix (which we recognize is a bit redundant).  Granted, we were scanning the crowd for one of the little Jewdars, so we were a bit distracted, but it actually took us a minute for it to register that unlike “Bandai,” “Hazarai” might be something that Jewdar should check out.  Lo and Behold, not only was it in fact, the Yiddish word for–well, “junk,” basically–but the guys behind it (L-R, Jonathan Griggs, Ian Griggs, and Mathew Weiner) are FOJN.  Granted, being Friends of Jeff Newelt (Heeb’s comic book guru and resident Saul Rubinek impersonator) is not quite the same as being Friends of Jewdar, but still, attention must be paid.

As for that attention, Hazarai, in the words of Ian, is what happens when “Ebay knocks-up Etsy at Comic-Con, an online social marketplace catering to all things geek and pop culture.  a one stop destination to shop, sell, share, and geek out.”  Essentially, it’s an online, 24/7 comic con, without the overstretched spandex.  Oh, and without the fees to list, sell, or enter.   Don’t get us wrong–nothing beats Comic Con, but it’s nice to have Hazarai around for the other 361 days of the year.The site is just in its infancy (in fact, when we ran into the guys on Sunday, it wasn’t even old enough to have its bris), but we wish it should live to 120, and we suspect very strongly that Jewdar will be spending entirely too much time and treasure on Hazarai (what can we say, you tell a comic geek that he can get his fix without having to even get up, he’s going to jump–well, metaphorically, at any rate–at the opportunity).

At any rate, to learn more, check out their origin story, and for whatever your pop-culture jones may be, definitely check out the site.