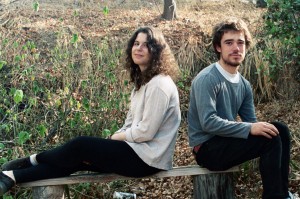 Just in case y’all weren’t worried enough about where your lives are headed, here’s another turn of the screw: all members of lauded indie-pop troupe, Avi Buffalo, are under the age of 24.

I met up with the road-weary Avi (Avigdor Zahner-Isenberg) and Sheridan Riley (Arin Fazio and Rebecca Coleman were not playing on that part of the tour) before their Washington, D.C. show. The two spoke with Heeb about how they met up, Avi’s surprisingly supportive family and how Jewish summer camp is what we have to thank for the band’s music.

From every interview I have read about you folks, people have always asked about being so young. Does that get annoying after a while?

Sheridan Riley: I think it’s just because we all happen to be young and there wasn’t just one member that’s maybe a year or two younger than everyone. Also cause we all look kind of young.

Since so many people enjoyed your first album (disclosure: this includes me) does that put more pressure on you to put out a better follow-up album?

AB: It’s terrifying. I mean I can’t think about it, can’t worry about it too much.

AB: Of course there’s pressure to make something

SR: There’s things we want to do on the next album. A lot of the album was done in segments. I want to—there was some things I didn’t know about getting sounds out of the drums that I know now that I would want to do again next time.

AB: Just as long as we don’t rush stuff.

AB: I started recording in 10th grade. I knew Sheridan from middle school. So we’ve been jamming all the way since then. We just got together a solid group and electrified. We just started playing shows. Then we met this guy named Aaron Embry.

He called me up like 8 months after we played some shows together and was like, “yeah, my wife’s pregnant and I’ve got a studio, if you want to come mess around.”

We cranked out a couple of tunes and the people at Sub Pop heard it. We started touring like nuts and everything got weird after that.

AB: Just intense, we’ve been all over the place.

So you guys are like two years after graduating from high school. Is it weird that all of your peers are just starting college—basically doing nothing—and you guys are touring the world?

I mean I’ve just been playing the same songs for two years.

So what was it like telling your parents, “Oh, I’m not going to college. We’re going on tour.”?

AB: They were surprisingly supportive. We’re from musical families, very pro-music people. When it seemed like there was an opportunity to do it legitimately, they were supportive.

SR: It would be hard to do all this if our parents weren’t supportive.

So I heard from Bekah Zietz at Sub Pop that you went to Jewish summer camp.

AB: Yeah. In fact we’re staying with one of my old camp friends from Gilboa, which is on the west coast. He’s playing with us tomorrow and we’re staying at his place. His name is Jesse Rifkin.

Yeah, I read a Heeb article about him (shameless mid-interview plug).

Yeah, without Habonim I wouldn’t be doing music. At all.

Wait, what?
AB: Yeah, there would be musicians at the camp and older kids who played guitar. There would be a Saturday night jam sess’/talent show thing and everyone would play Wilco covers and—haha—shit like that and the Grateful Dead.

It was a very influential place, that Zionist, socialist camp.

So would you ever play Israel?

AB: That would be sweet. I hope to some day.

SR: Yeah, that would be cool.

AB: Get to see Israel.

It looks like some Israeli phone company is going to have somebody else cover one of our songs.

Yeah, I’m not sure what it is. I don’t know if it’s gone through yet.

SR: Yeah, I was talking to this older Israeli man and he didn’t know I was in Avi Buffalo. I was just waiting to hear Girls play. And he was like, “Oh, where do you play?”

And I said, “Yeah, I play with Avi Buffalo.”

AB: Yeah, some Israeli website called me up and they were like, “Oh, your name is Avi. You’re Israeli. That’s so uplifting.”

Since it’s such a hard time over there all the time. There was some implication that they wanted it to be a morale booster for them.