Chosen Books: Drinking at the Movies 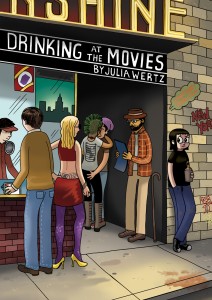 Drinking at the Movies is Julia Wertz’s graphic memoir that tracks the year she moved from her beloved San Francisco to the mean streets of New York City.

Drinking offers no surprises when it comes to describing  the qualms of New York city living.  We’ve heard it all before: substandard housing, loneliness, poverty and—spoiler alert— the necessity of ‘drinking.’

While the subject matter is pretty commonplace, Wertz’s storytelling method is refreshingly brazen and told in a gruff, yet girly, take no prisoners voice. Everyday, ahem, functions, from pooping (“Oof, I’m so full, I’m gonna give birth to a burrito through my asshole.”) to getting mugged (“Listen motherfucker if you even try to mug me I’ll rip off your face and ride into the sunset on a unicorn made of your skin!”) are described in the kind of humorous, “brush that dirt of your shoulder” toughness that could only belong to a real New Yorker…even though she actually isn’t one.

Speaking of which, another thing Wertz ‘isn’t’ is sober.

With the rare ability to step outside “reality,” through her drawings, Wertz capably describes her brother’s drug addiction, her alcoholic proclivities and her stepfather’s cancer, without getting into too much self pity.

Still, Drinking is occasionally lacking in depth or subtlety. And while you might not expect the author of The Fart Party to be the source of overly mature intellectual stimulation, even readers with the most immature senses of humor will think, “I get it, you drink whiskey, dress like a shlub, poop, and have accidents.”

Drinking at the Movies, blunt and immature as it may be, has some real moments of pleasure.