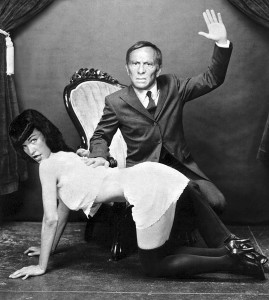 Still, between the advertisers and elderly Jewish widows enamored with Neuman’s dubious charms, money was coming in. But even though Heeb paid its contributors very little, Neuman squandered Heeb’s considerable resources with complete disregard. He spent a fortune of Heeb’s savings amassing the world’s finest collection of Norman Fell memorabilia, the crown jewel of which was the plunger that Fell used in the opening sequence of The Ropers, and which he acquired only after a costly bidding war with a Japanese electronics magnate and an Omani sheik. Later, a small fortune was spent on expensive condiments for his “collection”; lawyers’ fees were wasted on his frivolous efforts to trademark the word “irreverent”; and Heeb’s “Self Hate” issue had to be cancelled after months of preparation, including wardrobe rental for the Noam Chomsky’s and Norman Finkelstein Hope and Crosby-inspired “Road to Ramallah” photo shoot.

By the end of the Neuman Era, the office consisted only of Neuman and Brian Abrams, a lonely drifter to whom he had inexplicably become attached, whose sole connection to Jewish culture seemed to be an obsession with the word “tushy,” and who lived off of scraps of food that Neuman brought him from lunches at the Friar’s Club. What Abrams didn’t realize was that Neuman himself had long been banned from the club’s premises after repeatedly exposing himself to female members while claiming he’d been possessed by the spirit of Milton Berle, and he was just bringing Abrams scraps that he himself had fished out of the club’s dumpster. Once the Friar’s Club began putting a lock on the dumpster in the back alley, Neuman knew it was time to throw in the towel and handed the reins over to David Kelsey, who runs the company to this very day.