Can We Please Have A Jewish Superhero Blockbuster?

Leading up to this year’s Comic-Con, the web was aflutter with anticipation over which new film projects the studios and comic book publishers would collaboratively announce at this annual gathering of geeks. But the one movie project speculated over most was an unnamed mysterious Marvel vehicle scheduled for release in 2014. Some bloggers guessed (or hoped) that this would be a great opportunity for ole Hollywood to produce a superhero movie with a minority as the lead character. Would it be the story of Luke Cage, which already has John Singleton attached and has been in limbo for nearly a decade? Or would it be the Black Panther, Marvel’s most well known and prominent African-American hero? Or could it finally be the long rumored Magneto film detailing his survival through the Holocaust now that the thespian Michael Fassbender has already played him once to critical acclaim?

Turns out that it was none of the above. Marvel unveiled that the unnamed project is actually the relatively obscure, uber-geeky Guardians of the Galaxy, an interplanetary group of supersoldiers assembled to defend the universe against galactic threats. Even writing that sentence warrants me a wedgie from a bully. And while there are no minorities on the Galaxy team, there is however a talking raccoon. Seriously.

I can’t help but think about the squandered opportunity here–another bloated, cast-heavy ensemble venture.
But while this year’s Comic-Con fanboy drool has already dried up, it’s never too early to have an impact of next year’s convention. Which is why I have decided to pitch a few potential movie projects featuring my favorite Jewish superheroes in the hopes that a) Hollywood is reading and b) the world is finally ready for a super-powered Semitic role model who isn’t the Hebrew Hammer. 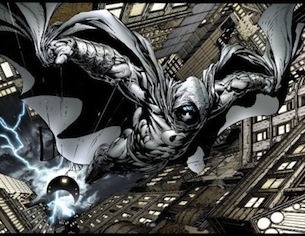 The hero: Moon Knight
Jew factor: Chicago-born Marc Spector is, according to Wikipedia, an American rabbi’s wayward son. Daddy issues! Rabbi issues! This requires actual acting chops.
Powers: He is said to be as strong as ten men under the full moon, though his strength is normal under a new moon or an eclipse. Ten is a minyan! Coincidence?
Can it be a blockbuster? Moon Knight has the Batman vibe–edgy, brooding, and dark. And in 2011, noted comic writer Brian Michael Bendis relaunched the character as the possessor of three alter egos, which aids him in both dealing with personal demons and fighting law-breakers, but also takes a further psychological toll on him causing dissociative identity disorder. Who doesn’t want to see this movie?
Who could play him? Jeremy Renner broods well. In fact, that’s just about all he does in movies. Or maybe Ben Stiller? 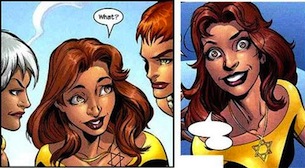 The hero: Shadowcat
Jew factor: Katherine Anne Pryde is the daughter of a Holocaust survivor. Kitty, as she’s known to her fellow X-Men team members, has also worn a Star of David necklace in the comic.
Powers: Shadowcat can phase through solid objects, and is also, apparently, a computer science genius.
Can it be a blockbuster? Ellen Page played Pryde in X-Men 3, but her role was relatively minor. Bring Page back for a role reprisal, get a young female writer other than Diablo Cody to write the script, add in the adolescent awkwardness of dating boys when you’re going through puberty and walls, and, boom, it’s practically a sure thing.
Who could play her? Ellen Page. If she’s not interested, then Chloe Moretz. Or for that matter, any actress that possesses “spunk.” 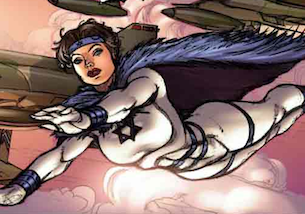 The hero: Sabra
Jew factor: Sabra, or Ruth Bat-Seraph, was born in Jerusalem, Israel.
Powers: If you guessed that this Israeli’s super power was rudeness, it’s true, but then again, this is a quality she shares with everyone else in her country. Sabra is actually a mutant, and her strength, speed, agility, reflexes, endurance, and stamina are all enhanced to superhuman levels. She can also withstand high caliber rifle fire impact in case you were going to, like, shoot her.
Can it be a blockbuster? An Israeli super heroine? Oh, hell yes. I mean, it’s rife for exploring regional and political tensions, but it’s also an opportunity to finally show a confrontational Israeli woman because this is a thing that’s never existed beforehand.
Who could play her? Natalie Portman was also born in Israel. And it’s time for her to sell out  already, while perhaps her doing so in tights. 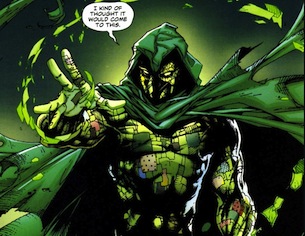 The hero: Ragman
Jew factor: Rory Regan was initially thought to be Irish, but it’s revealed that his father Gerry Regan changed his name from Jerzy Reganiewicz after he emigrated from the Warsaw Ghetto, which unfortunately was a real place, to Gotham City, which is not a real place.
The writers of the vigilante’s mini-series also revealed that Ragman was inspired by the legend of the Golem, and Regan’s mentor is even named Rabbi Luria, in homage to the Ari’zal, the father of contemporary kabbalah.
Powers: Rory’s costume is a living patchwork of various supernatural materials, each one inhabited by the soul of an evildoer he’s defeated. The Ragman can draw upon the physical powers of any number of the corrupted souls that make up his suit, which can increase his strength, speed and stamina dozens or even hundreds of times over.
Can it be a blockbuster? Hmmm. Tough call. This is a movie about a guy in the schmatte business, and ultimately, it’s difficult to get people excited about a guy dressed up in haunted patches. Can we get Fincher on the phone? Or how about Tim Burton? They may be able to get something done here.
Who could play him? This project is weird enough for James Franco. 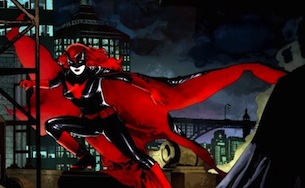 The hero: Batwoman
Jew factor: Kate Kane is not only Jewish, but she is a lesbian. Which makes her the liberal’s superhero and also pisses off Stromfront. Bonus points!
Powers: Like Batman, Batwoman doesn’t have any super human powers, but, according to Wikipedia, she is armed with  “weaponry disguised as feminine items like lipstick and a compact.” How progressive.
Can it be a movie? With the final Batman installment being released this week, it’s unlikely that the franchise will be rebooted for a third time in the near future. But a big budget Batwoman movie would be a real opportunity for DC considering their horrible track record with female superhero projects. Exhibit A: Halle Berry’s Catwoman. Exhibit B: David E. Kelley’s Wonder Woman TV series that never aired. Exhibit C: Helen Slater’s Supergirl movie from 1984.
Who could play her? Mila Kunis. In black leather. And as we also know from Black Swan, Kunis is comfortable kissing other women. Cha-ching!