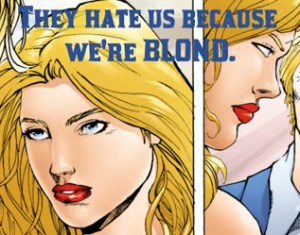 Holy shit, this Matthew Hess guy totally wants a fight! The trailer for the coming issue of “Foreskin Man #3” trailer is out, and if you were expecting any retreat or apologetics to circumcision’s most intense American fan base, you will be sorely disappointed. The words, “They Hate Us Because We’re Blond,” appears in the first two seconds of the trailer.