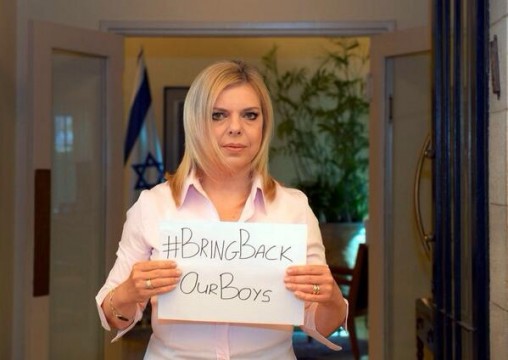 Jewdar is not one to be glib regarding such things as the kidnappings of the three bochrim, so we won’t be. But Jewdar is also not one to attempt to score cheap and stupid political points from such things, either, which puts us ahead of those who have taken to the internet to bemoan the supposed double standard of Michelle Obama calling for the return of the kidnapped girls in Nigeria but not for the three yinglech (for more of the same, see the Bring Back Our Boys Facebook page comments). This reaction is wrong on so many grounds.  In no particular order, let’s examine them:

1.  Jewdar is not generally inclined to compare and contrast atrocities, but sometimes, numbers matter. These are three kids. Innocent, don’t deserve to be kidnapped, should be returned immediately, no doubt about it. But these are three kids. In Nigeria, we are talking about close to 300. Guess what? 300 kids being kidnapped is a lot more atrocious an atrocity than kidnapping three kids.

2.  Kids get kidnapped all the time, all around the world. Most of them receive no words of support from the first lady, or any other public figure. And I’d warrant that many of the people enraged about FLOTUS’ supposed moral lapse have wasted any sleep on those kids either. Maybe that’s a flaw, or maybe it’s a reflection of the fact that the kidnapping of the 276 girls was more shocking than most kidnappings, both for the numbers, but also for the terms involved.

3.  Let’s assume that the three boys in Israel were kidnapped by a terrorist group that wants a prisoner exchange. So at some point, they will presumably make their demands known. At this point, quite frankly, we have no idea if they are even still alive, but let’s assume that there will be some terms for negotiation. That might be hard, but it’s something comprehensible. In Nigeria, by contrast, Boko Haram basically told the parents of 276 girls that their daughters would be turned over to adult men to be their sex slaves, no terms, no negotiations. Jewdar feels for the parents of the kids in Israel, but we gotta admit that Boko Haram shit is crazy.

4.  You know what, Jewdar is, as the name suggests, crazy about Jews. We read about a plane crash, we’ll check the names to see if any were Members of the Tribe. We imagine a lot of the people criticizing Michele  Obama feel the same way. So you know what, maybe Michele Obama, a black woman with black daughters, cares more about what happens to black girls in Nigeria than she does to what happens to Jewish boys in Israel? Don’t we generally want Jewish political figures to show the same kind of chauvinism?

5.  Ultimately, the white house did issue a statement. Was it a few days after kidnapping?  Yes, but then, so was Obama’s Bring Back Our Girls picture.

6.  Jewdar will go out on a limb here and suspect that many of the people criticizing Obama now for not making a little “#BringBackOurBoys” sign share the same political affiliations of those who were criticizing her for her advocacy for the girls in Nigeria. And need Jewdar remind you that those girls are still being held prisoner? So why is there so much demand the FLOTUS make do the same ultimately ineffective publicity ploy for the three Israeli boys. Finally, we wonder if people like Ann Coulter will now make fun of Sarah Netanyahu for doing the same thing?

Jewdar suggests sincerely (and granted, smugly and self-righteously as well) that rather than spending their time and energy on political invective, Michele Obama’s critics should join us in praying for the safe return of Gilad Shaer, Naftali Frenkel, and Eyal Ifrah.  May God protect them and return them unharmed to their families.