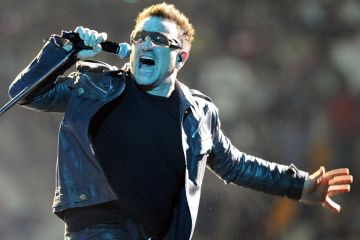 Get a load of this Jew

2014 has been a rough year for Bono: U2’s “free album” iTunes stunt was roundly criticized by fans and critics alike, he admitted his iconically goofy glasses are a result of having glaucoma, and finally, he broke a whole bunch of bones while biking through central park. Sure, he’s ultra-wealthy, and an international rockstar, but you’ve still gotta feel kinda sorry for the guy, right? (okay, no, of course you don’t)

You do, however, have to marvel at the sheer inventive chutzpah he has when it comes to leaving the house without being recognized by throngs of fans. When U2 bandmate The Edge was asked by KROQ DJs Kevin & Bean why no one managed to snap a picture of Bono after his bike wreck, The Edge explained:

“You know, when Bono goes cycling he likes to dress up as a Hasidic Jew.”

Given that Bono is, in fact, a publicly devout Christian, dressing as Hasidic Jew is truly an inspired act of misdirection. When he crashed his bike did he scream and swear in yiddish so as not to break character? And do you think Bono and Macklemore buy their disguises at the same costume shop?

You can listen to The Edge’s full interview below:

UPDATE: 3:07 PM: The Times of Israel is reporting that a spokesman for Bono has walked back The Edge’s charge. So far they’re the only ones.