Those first four are true everywhere, and that last one? Well, if you’re buying your swing from Seattle’s BB Ranch, odds are you’re eating a pig full of pot. As NPR’s Eliza Barclay reported yesterday, William von Schneidau, an enterprising butcher from Washington state, has begun feeding his herd stems, leaves, and root bulbs, resulting in “redder, and more savory ” meat. The pot, collected from Top Shelf Organic, a local dispensary, seems to be in response to the rising cost of livestock feed, which has prompted a number of independent farmers to seek alternate ways of giving their porcine pals their recommended daily caloric intake.

So, is the bacon getting all “age of aquarius” from its new feed? Well..the jury’s out. Per Barclay:

It’s not clear whether the pigs feel anything from the weed in their feed, or how much, if any, THC — the psychoactive substance that gets humans high — ends up in the meat. Rather than an attempt to develop a new meaty treat for stoners, the “pot pig” experiment seems mostly to be an (effective) publicity stunt.

Still, you know what they say: When it comes to not keeping kosher, pork is just a gateway meat. 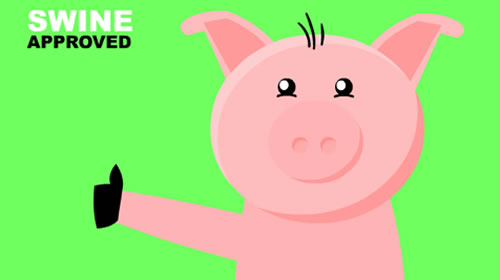 [via, cover image via]