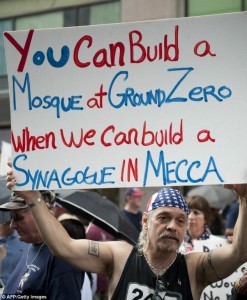 We know, we know, a lot of you were getting worried that what with all the changes here at Heeb, and our long absence, that Jewdar was no longer providing cutting-edge commentary for this great nation’s semi-literate Semites. Fear not. Although the earlier part of the summer was occupied by moving Jewdar’s mother to NYC from our Dairy State homeland, and the second part was occupied by spending my days feeling like we’d been kicked in the nuts, courtesy of a pulled groin suffered during the aforementioned move, Andy Pettitte has inspired us, and we are now ready to work through the pain, and do what we do best. We knew that after such a long hiatus, our devoted readers are expecting something big, and Jewdar doesn’t intend to disappoint. We presume that you’ve all been following the NYC mosque brouhaha, and, like all good Americans, are hoping that someone in the media will tell you what to believe. Well, wait no longer—Jewdar has evaluated all the arguments made on all sides, and is prepared to tell you all you need to know to properly love America.

1. “Mosque at Ground Zero”—Right off the bat, the anti-mosque crowd has a problem. The mosque is actually two blocks from Ground Zero (perhaps they are confusing it with the actual Muslim prayer room that was in the WTC). This may not mean much in parts of the United States where there are mall parking lots larger than some New York neighborhoods, but in Manhattan, real estate is measured by inches, not acres, and two blocks makes all the difference in the world. A mosque two blocks from Ground Zero can be considered at Ground Zero when a tenement on 98th Street can be considered on the Upper East Side and not East Harlem.

2. “Islam is a religion of peace”—Let us accept that no religion, with the possible exception of that of the Amish, is a religion of peace (and even with them, just watch what happens if you call those bare-lipped bastards Old Order Mennonites). That said, certain historical developments have made Islam much less a religion of peace than a few other religions that come to mind. This has very little to do with the inherent traits of these religions themselves than the changes that have taken place in the Western world since the 16th century. The reason why the Catholic Church no longer runs Inquisitions is because they can’t, not because Catholicism is inherently opposed to such things (you know, what with them initiating them and all). There are no shortage of Orthodox Jews who would be very happy to open up a great big can of genocide on the Palestinians, and not see anything in that which would challenge their own smug sense of moral superiority.  What keeps them from doing it isn’t the Torah (which they cite as their authority for aforementioned genocide), but those pesky secular Israelis in power, with their milk-and-meat meals and modern notions of human rights.   And even some of the Dalai Lama’s previous incarnations, before the age of celebrity Buddhists, were homicidal monsters, who, in one case, killed not only a government minister who offended him, but the man’s reincarnation (a small boy) as well..  So is Islam a religion of peace? No, but let the Muslims run through a few centuries of Reformation, Scientific Revolution, and Enlightenment (or at least hook up with Richard Gere), and who knows what might happen? In the meantime, the phrase “Islam is a religion of peace” is one that should strap on a suicide bomb belt with an overly sensitive trigger mechanism.

3. “Nobody’s denying their right to build the mosque, only objecting to the location.” This would probably be a bit more persuasive if, in fact, so many people weren’t attempting to deny them their right to build the mosque at that location. Nor are these people simply angry letter writers. Carl Paladino, who may very well be the Republican nominee for governor, has promised that, if elected, he will use eminent domain to seize the land slated for the mosque. Sounds a lot like denying them a right to build the mosque to Jewdar. Moreover, it’s not like there’s some universally accepted standard of what is and isn’t within acceptable distance from Ground Zero. The fact is, the mosque’s builders could decide to build it a mile away, and still have people protesting that a mile is too close.

4. “The WTC attack was only done by 19 extremists.” We love the notion of Mohammed Atta being some lonely schlub, marginalized in Muslim society because of his hatred of America. “Nobody gets me,” wails Atta, until he finds 18 other guys in some chatroom (“Wait, you mean you hate America, and love long walks on the beach too?) and they hatch a scheme. Fine, it was only 19 extremist Muslims (not just “extremists”), but they were part of a movement numbering in the thousands, who received support from a network numbering at least in the tens of thousands, and are adherents of a movement in Islam, Wahhabiism, number in the tens of millions.

5. “Opponents of the mosque aren’t intolerant bigots.” This would be more compelling if there were some kind of qualifier, because while many may not be, a lot of them surely are. But even if they aren’t bigots, per se, in the sense of hating Muslims, they pretty much are all showing their prejudice, which is all about pre-judging. It may very well be that some people are deeply hurt by the thought of a mosque near Ground Zero, but that’s because they are associating these Muslims with those Muslims, which is about as textbook a case of prejudice as you can get.

6. “Opponents of the Mosque are all racists” It would be pure and simple racism if they were opposing the construction of an Arab church. While we’re not agreeing with them, the fact is that the issue here is ultimately ideology, not race. The question is whether or not this group of devout, religious Muslims shares the same ideology as that other group of devout, religious Muslims. That’s not necessarily a question that shouldn’t be asked, but it seems to Jewdar that a whole of people have simply accepted the premise that by definition, all Muslims do, and need to be treated appropriately. That premise may not be racism, but it’s not right, either.

7. “This like building a [blank] at [blank].” Historical analogies tend to remind me of Nazism—they are wrong. Building a mosque near Ground Zero is not like building a Nazi party headquarters near the Holocaust Museum, unless you ascribe to these particular Muslims the same attitudes as the Muslims responsible for the attacks.

8. “The mosque is going to be a terror base.” We don’t get this one at all. If’ it’s a terror base, who cares where it is—are we supposed to believe that the terrorists involved are going to be so lazy that if it were moved another six blocks away, they wouldn’t attack the new development on the WTC site (“Gosh, we hate America and its freedoms, but attack the Freedom Tower? That’s a 10 block walk!”)? Or that they wouldn’t find something else to attack?

9. “The mosque’s developers aren’t revealing where the funding comes from.” This of course, presupposes that there is funding that they’ve collected (and so far, it seems they have not much funding to report). But it is fair to say that some of the funding probably will come from sources that support radical, American-freedom hating, Wahhabi Islam. The problem, of course, is that as has been pointed out by wiser Jews than us (or at least Jews with a better research team), some of those same terror-lovers are also major investors in Fox News. Oops.

10. “You can’t build a church in Saudi Arabia.” And you can’t have a civil marriage in Israel. Should we not let Jews get married in America? Has it really come to this, that the best we can do is compare ourselves to the Saudis, and, what’s worse, conclude that we don’t have to come out ahead?

11. “The site’s choosing shows insensitivity.” Jewdar was willing to give some points on this one, since it did seem that if the goal were to build bridges, this was a monumentally stupid choice. However, it seems that there was nothing behind the choice, because the guy doing the choosing was a 19-year old kid (non-Muslim) who didn’t even know he was choosing a site for a mosque. We thought the choice of the site was thoughtless; turns out it was just lack of thought, which is a completely different situation.

12. “The site was chosen to celebrate the victory of the attack on the WTC.” Please see above. But while we’re at it, we’ll also address the notion that calling it “Cordoba House” is some sort of codeword for a new Muslim Caliphate. While Cordoba was the capital of a Muslim Caliphate, it was not a united caliphate, but rather represented a division of the Muslim world, since it broke free from Abassid rule, which makes it an unlikely choice for a movement interested in creating a unified Muslim state. While Jewdar thinks the whole “convivencia” thing is a bit overdone (the age wasn’t quite as Golden as 19th century Jewish scholars—for political reasons—made out), the fact is that it’s a staple of Muslim apologetics, and it seems a bit of a stretch to impute sinister motives to the choice.

13. “Whatever the origins of the whole thing, the mosque’s planners should move now that they know how offensive it is.” We confess to being a little drawn to this at first, if for no other reason than tactics. Really, if the goal was to make a community center that put on display the face of moderate, American Islam, things haven’t gone well, and it might have engendered some goodwill. But now, Jewdar has come down squarely on the side of the mosque. Of course, we support religious freedom, and of course, we see the opposition as being essentially un-American. And we recognize that there are people who lost loved ones on 9/11 whose pain is still real, and whose opposition is sincerely born out of their pain and hurt. But there are also people who lost loved ones that day (including Muslims)who support the mosque. And as for the vast majority of protesters who didn’t lose anyone that day? Jewdar’s official position is: Screw the crybabies.

Really, for us, that’s what it’s come down to.  Screw the crybabies, all the egocentric whiners who can’t understand the fact that their sense of umbrage doesn’t automatically have to be translated into public policy. Whatever happened to that great Enlightenment idea that “I disagree with what you say, but I will defend to the death your right to say it?” Great, so you’re offended by the mosque. Guess what, Jewdar is offended by things every day. But we don’t presume that consequently, every reference to Sex and the City needs to be obliterated from the public consciousness.

So be offended, but get a life. The mosque is not a problem for America, or New York. If they are terrorists, they’ll be investigated (like plenty of other mosques have been). But if the only argument you can muster against the mosque is that your panties are personally in a bind over this, then give it a rest, so we can focus on the really important matters facing this nation—like the new TV season. Jewdar is back, shana tova.