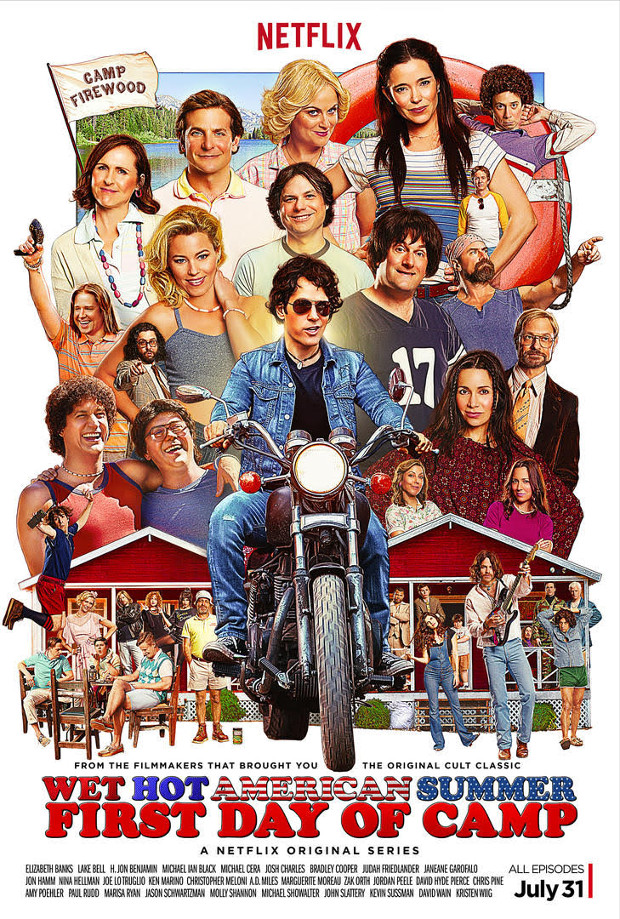 There’s a moment every life-long summer camper knows. The moment when you pull up at your Ramah, or your Towanga, or your Interlocken, get out of your car, or step off the bus, and think to yourself:

Sure you end up having a decent – maybe even a good – summer, but the thrill, as BB so succinctly put it, “is gone, baby.” And so you slog through to the end of camp, knowing in the back of your mind that this is it. You’re done. The sheer adolescent pleasure of cabin-living, dining hall-eating, 2nd base-getting (okay, maybe 3rd base, hotshot) summers are behind you.

That’s more or less how I felt watching Wet Hot American Summer: First Day Of Camp, the just-released Netflix prequel series to the 2001 feature film of (almost) same name. Taking place weeks before the events/vignettes of the film, First Day of Camp rounds up all the original Camp Firewood cast – no easy feat considering the levels of superstardom many have attained in the intervening years since the movie was released – and adds plenty of familiar faces to pad its eight episode run.

Any attempt to describe the series’ plot (or that of its cinematic predecessor) would be useless; the gleeful anarchism with which the series’ writers construct, then demolish, then skullfuck any number of 80’s movie tropes makes First Day of Camp an exercise in free-association, rather than coherent plotting. But, because I’m a glutton for punishment, here goes. There’s:

I’ll stop there. Suffice it to say, plot is really not a priority here. The show, like the movie before it, is a medium solely in service of jokes – Any kind of joke: One liners, slapstick, sight gags, satire. You name it – it’s all in there. And that, I think, is where the wheels come partially off the wagon for the show. 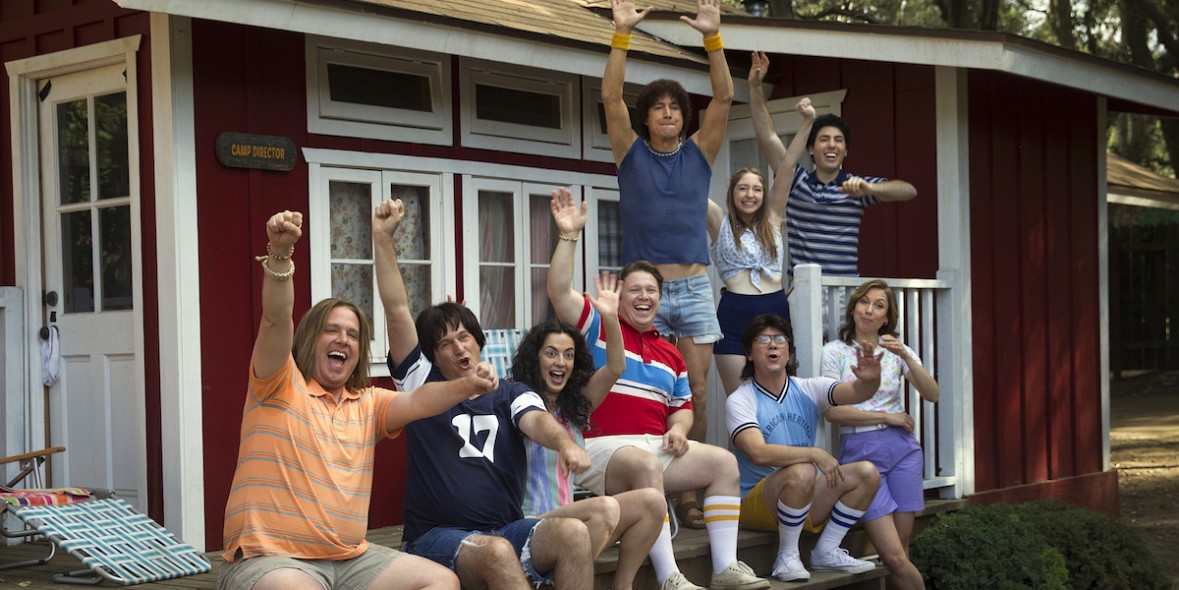 When Wet Hot American Summer came out in 2001, it was like a breath of fresh air after working a shift at the wet fart factory. This was the year of Scary Movie 2, Corky Romano, and Jay and Silent Bob Strikes Back. There were a few bright spots (Zoolander came out that year) but for the most part, 2001 was mostly dead fish when it came to comedy films. Enter: Wet Hot. Here was something entirely different – an unapologetically gonzo trip down something approximating memory lane, which eschewed broad, accessible comedy for “love it or hate it” in-jokes and one-offs. But while the film bucked any sort of linear narrative structure, it was, in fact, an astonishingly tight production – none of the gags feel like they’ve over-stayed their welcome, and everything seems surprisingly relaxed and natural (in so much as a film like that allows for anything to seem “natural.”)

By comparison, First Day of Camp feels, by and large, surprisingly over-constructed, and simultaneously, frustratingly unfocused. Yes, it’s funny – sometimes very much so – but the overall effect is disappointingly stale. Jokes stretch for too long, go nowhere, or just don’t land at a particularly memorable angle. Rather, the show leans heavily on the talents of its cast – and they are talented – to get the job done. And yet, I don’t blame writers Michael Showalter and David Wain for the series’ shortcomings. At least, not directly. Instead, I blame the format itself: An eight episode streaming series, clearly intended for binge-watching, which ends up being, in effect, a four-hour film (or at least, mini-series). Unconstrained by the need to keep things down to a trim feature-length, First Day of Camp suffers the same fate as the Anchorman: Extended Cut release – an endless-seeming plod through disconnected joke after disconnected joke, without much of a payoff for your patience. Yes, there are direct nods to the original film, but even those feel like unnecessarily tacked-on nods to the audience. Part of what made Wet Hot so much fun is how much it felt like it existed in a bubble, oblivious to any particular trend or fad. Here, the whole series feels weighted down by – or, at least in comparison to – the very source material from which it comes.

Which isn’t to say the series doesn’t have its moments. In particular, the “Electro-City” musical is a whole lot of fun to watch, as is David Wain’s pitch-perfect Israeli sleezeoid, Yaron. And, this being Heeb and all, I’d be remiss if I didn’t mention the sheer volume of yid-specific jokes tossed into the mix. Whereas the original film was Jewish in tone, with just a few explicit throw-away lines to confirm its semitic bona-fides, First Day of Camp lays it on thick: enunciated Hebrew, quips about traveling to Israel, and a shofar-dick joke, which, I promise, you are going to hear shouted out after last call by the same AEPi douches who think it’s still hilarious to quote Borat and Austin Powers. Some of it’s funny, some less so, and, ultimately, I don’t think any of it matters quite so much as some critics do.

All of which is to say that, by the end of First Day of Camp’s eight-episode run, I didn’t quite feel like I’d wasted my time, but I didn’t feel like I’d gotten anything new out of the experience, either (the irony being that even a spoof on 80’s nostalgia ends up falling victim to the very subject of its spoofery).

And so, just like that moment when you realize you’re ready to move on from your childhood camp of choice, you simply look up, look around, and find a new way to spend your summer, instead.