Just in Time for Passover, a Plague of Pestilence Strikes Egypt 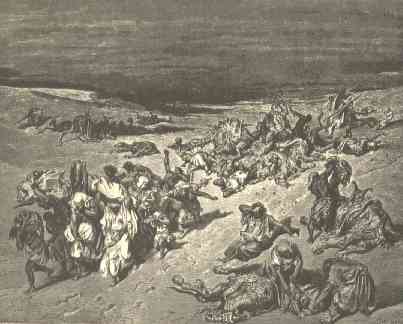 Like a human frosted mini-wheat, Jewdar often finds himself confronted by his two sides. The irrational true believer in us likes to see the hand of God in the world around us, the no-more rational cynic in us likes to find very reasonable explanations for everything. And so we go back and forth, examining first “on the one hand,” then “on the other hand,” then on a few more hands, like some kind of Hindu deity. Right now, we’re on the God hand, since today, two things come to our attention out of the land of Egypt. One is that a hard-core Islamist who wants to abrogate Egypt’s treaty with Israel is rapidly moving up in Egypt’s presidential polling. That would be pretty depressing by itself, until we saw this little bit. Apparently, Egypt’s livestock are being struck down. As if by a plague. In the days leading up to Passover.

Up to 100,000 Egyptian cattle are suspected to have been infected by a new strain of foot and mouth disease that is sweeping the country, according to Agence France Presse. Based on numbers provided to AFP by Egyptian farm authorities, about one tenth of the suspected infected population has already died.

Foot and mouth disease affects cloven-hooved animals such as cows, sheep, and pigs.

Now of course, this may very well be mere coincidence, and perhaps the Guardian of Israel does either slumber or sleep. But we would like to take this opportunity to point the coincidence out to any Egyptians who might be reading–sure, maybe its nothing, but considering what happened last time around, you guys might want to choose your Pharaoh verrrrrrrrrrrry carefully.