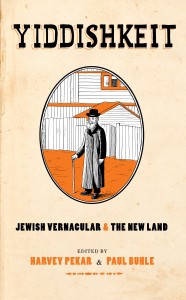 My grandparents used to speak “Jewish” when they didn’t want me and my brother to know what they were talking about. That’s how they, and many of their generation, referred not to Hebrew, but Yiddish. My strong sense of Jewishness has always been based not on Zionism, not on religiousness, but on what I now recognize to be “Yiddishkeit,” loosely defined as “Yiddish Culture” / “Jewish Sensibility” mit, in my case, a schmear of Woody Allen, Larry David, & Mel Brooks.  I don’t speak Yiddish, but I know many schmucks, schmeckels, & shmendriks. I am, however, fluent in faux-Yiddish. After family dinners my Grandma would hug and say “Bangaluch!” Eventually I asked what that meant in Yiddish. Turns out it was “Good Bye and Good Luck” very fast with a Yiddish tvang. Also, a “farlayta” was the Sweet & Low she slid in her purse “for later” and the ‘lil wieners one ate at cocktail parties: smladiks (small hot dogs.)

This brings me to Yiddishkeit: Jewish Vernacular and the New Land (Abrams ComicArts), the reading of which zetzed me upside the noggin, illuminating the origins of a jew ne sais quoi. The hearty hardcover is a scrumptious smorgasbord of comics, essays, and illustrations, edited by Harvey Pekar and Paul Buhle, providing concentrated tastes, with historical context, of Yiddish theater, literature, characters and culture. Pekar, who passed away in 2010, was known primarily as a pioneer of autobiographical comix (American Splendor, Cleveland, The Quitter), as well as a jazz critic, but had other passions that he approached with scholarly intensity, Yiddish novels being one of them. One of the funnest parts of Yiddishkeit, is Pekar’s guided tour of his favorite underappreciated authors like David Bergelson who was rounded up with other intellectuals by Stalin, and who Pekar poignantly praises in a way that could describe his own work: “a fine eye and ear. His notice of little things enriches his work. Makes it more personal.” Pekar also gets a kick out of zinging the overrated like Isaac Bashevis Singer who “conned the public for years with his wise old man routine”

As a treat for Heeb readers, we did something unusual, asking artist Sara Lautman, whose quirky urban shtetl-ish “Brooklyn Stories” comics we adore, to depict some scenes from Yiddishkeit that weren’t drawn in the actual book! She chose four choice chunks [below] of The Essence: A Yiddish Theater Dim Sum by Allen Lewis Rickman, a play/revue embedded-in-full in the middle of the book, that bounces from Yiddish theater excerpt-to-excerpt, peppered with Rickman’s rambunctious narration/ commentary. 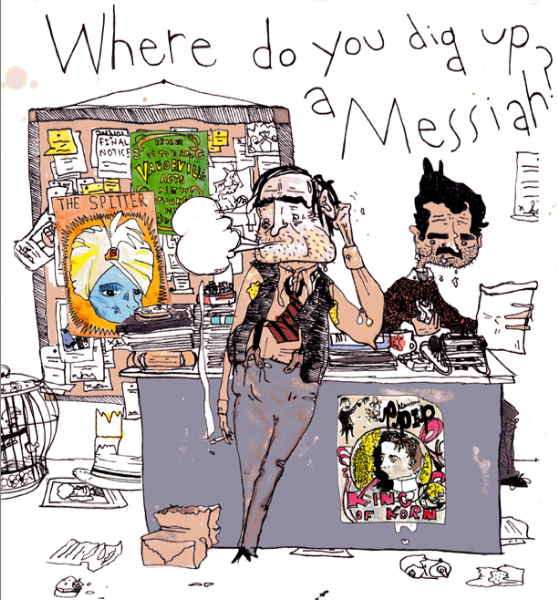 “Papirosn (Cigarettes), by Heman Yablokoff, is the most shamelessly maudlin song ever written by anybody. Remember ‘Alone Again Naturally’? Okay multiply that by ten,” says Allen Lewis Rickman in The Essence: A Yiddish Theater Dim Sum.  [page 116] 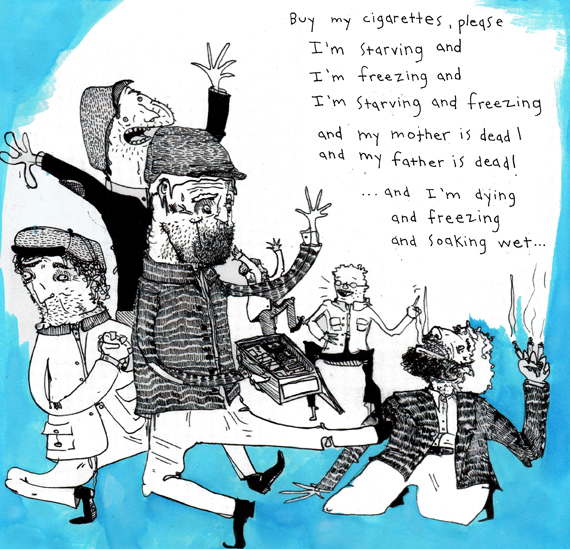 “Most of the American Yiddish theatre in the ’50s and ’60s was featherweight shund… one hundred and forty thousand Holocaust survivors came here after the war and they made up a significant part of the audience at that time. More than anything, these people needed to know that life could be good again. They didn’t need The Dybbuk or The Jewish King Lear, they needed Mickey Mouse with a yarmulke.”  [page 129] 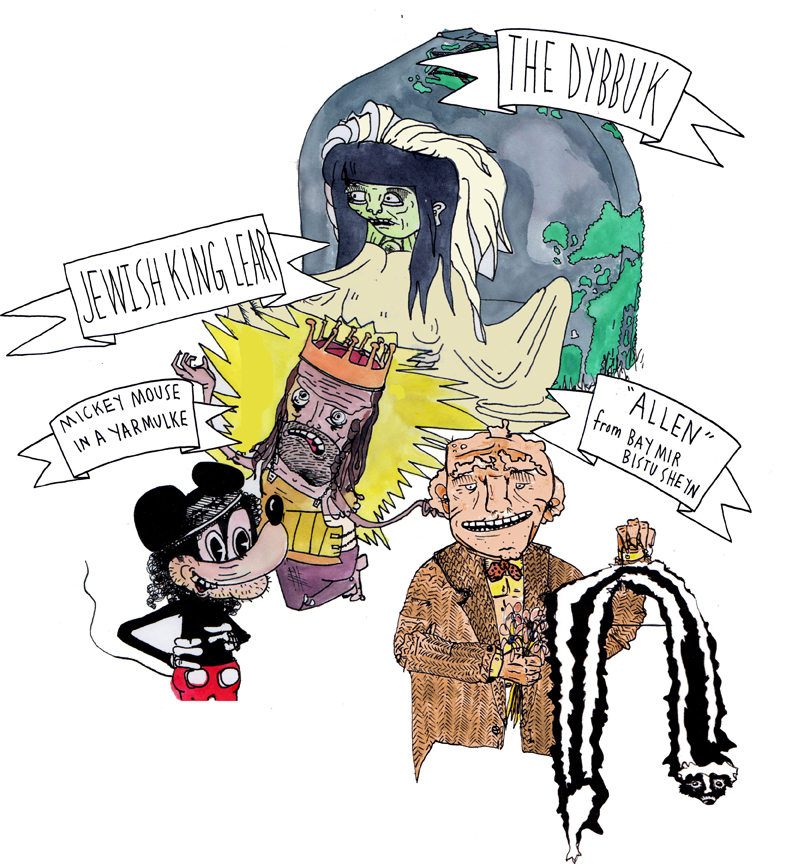 “From the play The Megilla of Itzkik Manger — the story of Esther as told by playwright Manger. King Akhashverosh After the Assassination Attempt (Der Melekh Akhashverosh Nokh’n Atentat), is a poem inside the play about King Akhashverosh, who, if you remember the story, was an imbecile.” — Allen Lewis Rickman  [page 128] 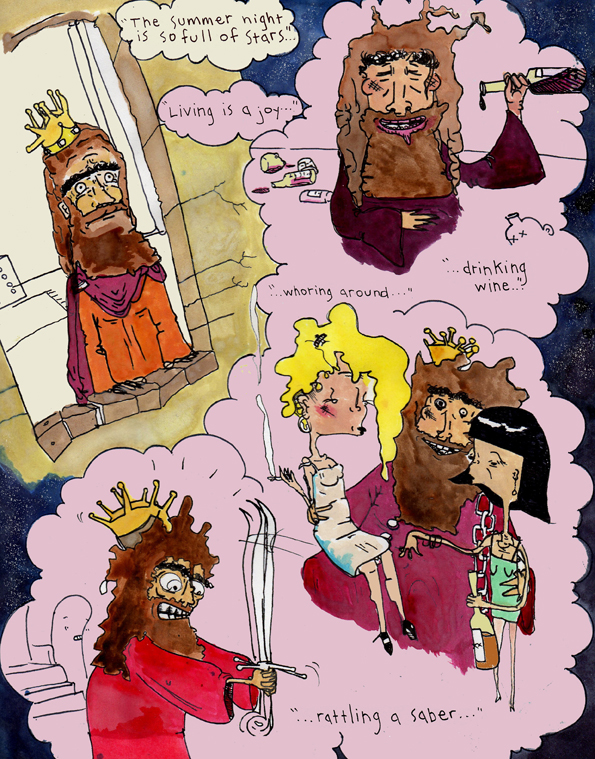 "King Akhashverosh After the Assassination Attempt" art by Sara Lautman