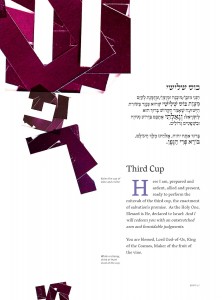 Having grown up in an Orthodox Jewish home, our family would compete year after year over who had the most obscure edition of the Haggadah. And it would never cease to amaze me how Jewish publishing houses were always unearthing and printing commentaries for the seder table by long deceased rabbis. In fact, chances are if they had a beard and an opinion on the Exodus, we had their book at our table.

And now this year, joining the ever-expanding library of Haggadot by Rabbi Joseph Soloveitchik, Maimonides, and Artscroll, among many others, I’ll add the commentary of children’s book author Lemony Snicket to the pile. The New American Haggadah, edited by Jonathan Safran Foer and translated by Nathan Englander, features insights by the aforementioned alter ego of Daniel Handler, political reporter Jeffrey Goldberg, the University of California’s Jewish Studies professor Nathaniel Deutsch, and philosopher and novelist Rebecca Newberger Goldstein. The commentary is categorized and organized according to a theme relevant to each writer’s respective area of expertise; the intellectual “House of Study” for Deutsch, the globally conscious “Nation” for Goldberg, the heady “Library” for Newberger Goldstein, and the silly, sometimes poignant “Playground” for Snicket.

But before I recommend this Haggadah for your Pesach seder this coming Friday night, (if you can still find it–I’m told, first printing is sold out in most stores), I feel the need to assuage the concerns of the traditionalists. But more importantly, I feel the need to apologize for having been one of those traditionalists. When I first heard about Foer’s undertaking to modernize the seder table discourse, I grew concerned for seder table discourse. Concern grew to palpable worry when I learned of Nathan Englander’s involvement–having read For the Relief of Unbearable Urges, it seemed to me that Englander, soured by his experience in the Jewish day school system, had some resentment towards Orthodoxy, especially that of the Ultra variety.

And then I read yesterday’s New York Times editorial by Foer titled “Why a Haggadah?” and I felt even worse about my skepticism. “Why did I take time away from my own writing to edit a new Haggadah?” the author of Everything is Illuminated asks. “Because I wanted to take a step toward the conversation I could only barely hear through the closed door of my ignorance; a step toward a Judaism of question marks rather than quotation marks; toward the story of my people, my family and myself.”

Englander, however, considers his translating work enriching much in the same way that looking through old family photo albums can be, those of a family he felt an affinity for, but had not known personally. “When I opened a Haggadah and looked at the English side of the text, what I saw, what became really clear to me, is this text,” he told NPR. “I feel like you should read it and weep, it is so stunning, it is so beautiful, it is just gigantic in a million different ways, and I wasn’t seeing on the page what I was hearing in my head. I came to recognize how much I truly relate to texts.” Englander then added, “[but] not to organized religion.”

More often that not, I feel that truly progressive culture considers tradition an inherently outdated imposition, and when that happens, we create new customs in the image of ourselves. Ego informs our self-serving and newly compromised observances, and we ostensibly become not interpreters, but remixers resulting in a song that sounds nothing like the original. The harder task, though, is covering the song in a way that while it’s distinctively yours, the source’s truest and richest elements remains present.

What I admire most about the New American Haggadah is that, ultimately, Foer, Englander, Snicket, Goldberg, Newberger Goldstein and Deutsch all avoided the temptation to remix. While I’m certain these six contributors practice varying levels of Judaism (or some, not at all), the reverence for the text is palpable on every page. In fact, toward the end of his Preface, Foer explicitly states that “this Haggadah makes no attempt to redefine what a Haggadah is, or overlay any particular political or regional agenda. [Rather], like all Haggadahs before it, this one hopes to excite the mind and heart. Like all Haggadahs before it, this one hopes to be replaced.” Considering the competing pile of Haggadahs at my seder table, there’s a chance it could be. But then again, when considering the illuminated nature of this Haggadah’s text, there’s a better chance I may use it two years in a row.