These days, the only excuse I need to drink is “the crushing weight of being alive.” But, when I was young and still relied on “games” to facilitate getting drunk, my friends and I played something we affectionately dubbed “Fran-spin.”

Here’s how it worked:

Step 1) Remove the bladder from a box of cheap wine.

Step 2) Hold the bladder over your head, and tilt your head back with your mouth open.

Step 3) Squeeze the bladder of wine so that it doesn’t simply pour, but shoots into your mouth at high velocity.

Step 4) Repeat Step 3 for as long as you can while you spin in a circle.

Whichever one of us spun in a circle the most times before dying was considered the evening’s winner, and was allowed to spend the rest of the night vomiting in peace and quiet.

No one ever won. Everyone always lost. Some of these people are doctors and lawyers now.

I dredge up this boozy specter from my misbegotten youth to highlight exactly how dumb both drinking games and teens can be.  Why? Because a group of Florida (of course Florida) kids are in hot water after their “Jews vs. Nazis” twist on beer-pong went viral:

WE INTERRUPT THIS BROADCAST FOR SOME LATE BREAKING NEWS: Teens are horrible. And now here’s Carl with the weather.

Horrible as they may be, these guys were also be surprisingly creative… 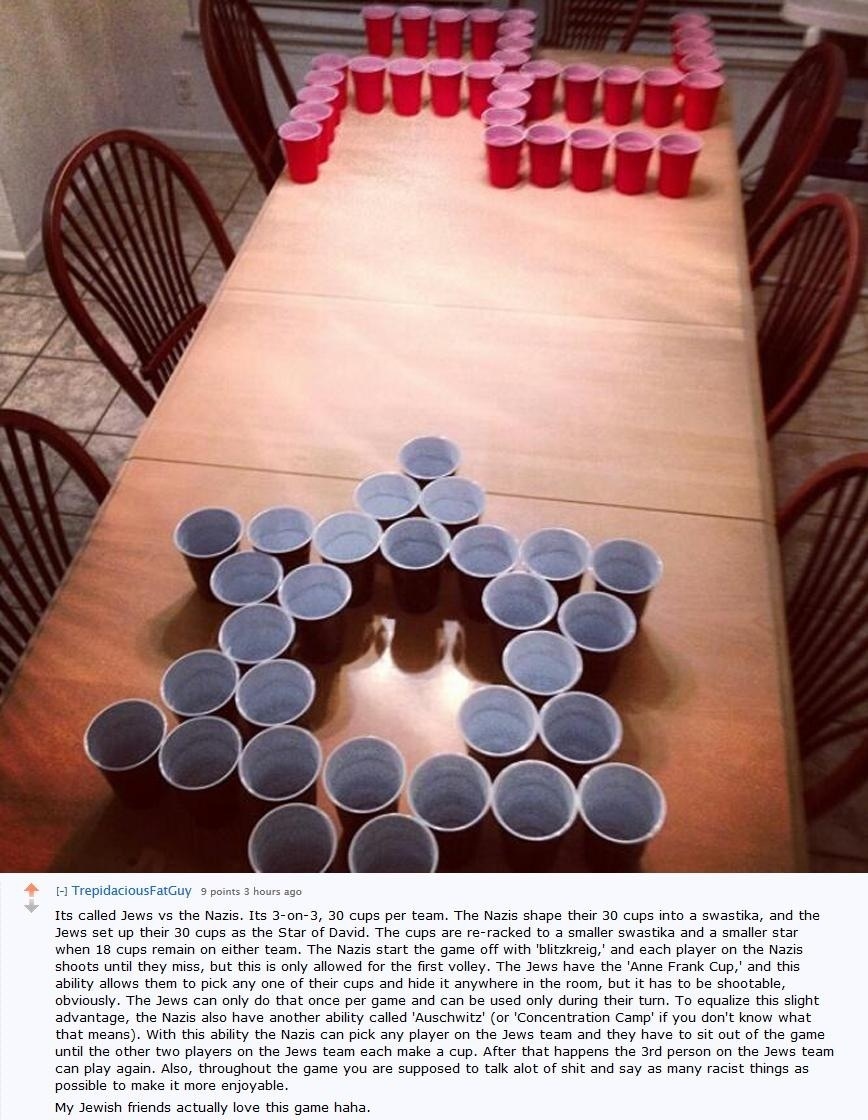 Dumb? Sure. Tasteless? Yup. Should we panic? Please.

Yes there are the shriller voices out there who would recommend some ineffectual Anne Frank-y homework assignment as punishment for these wayward yuts. But, as my colleague Jewdar pointed out some months back – that’s a terrible idea.

Instead, it’s worth remembering that, for as long as there have been things labeled “taboo,” there’ve been high schoolers who danced merrily over that line of “established good taste,” simply to see what’s on the other side. Why? Because that’s what being a teenager is all about: Figuring out boundaries, crossing them, and eventually, ideally, learning from the experience. Sunrise, sunset, circle of life, painted ponies go up and down blah blah blah. That’s just how the world works.

This time it was “Nazis and Jews.” Does that mean these kids are raging antisemites? Are they all little Hitlers in training? Hardly. They’re just a bunch of dumb kids who wanted to see how far they could push a bad joke. I’ve been there. You’ve been there. And now we’re here.

Perhaps, then, the best course of action is simply to grumble our displeasure, ground the little SOBs for breaking the law with such tasteless flair, and wait they’re old enough to realize that they were, in fact, a bunch of tremendous assholes. Hopefully by then they’ll be so embarrassed by their teenage indiscretions they won’t need stupid games as an excuse to get drunk.