Okay, here’s a weird one – As I’ve noted for Heeb before: Germany just can’t let go of Hitler. Now, a new music video by Berlin-based rap group K.I.Z. is either a new high point in Vergangenheitsbewältigung, or its nadir.

K.I.Z. have long been the naughty boys of German rap. Their music toes the line between meta-stupid and just plain stupid. Sometimes they’re gross (and not the good gross), and sometimes quite funny and clever. Think of them as a cross between the Tyler, the Creator who likes raping and killing people and the Tyler, the Creator who makes “Loiter Squad“. Their new song “Ich bin Adolf Hitler“ (“I’m Adolf Hitler”) presents the Führer as a hipster who does rails of speed (The real Hitler really was an amphetamine addict) in the shape of a swastica, and whom all the ladies love because of his mustache: “One snap of my fingers/and you’re on Schindler’s List plus two“. There are, however, some things he doesn’t like to talk about: “Jewish question? Good question. Hmmm… next question.“ 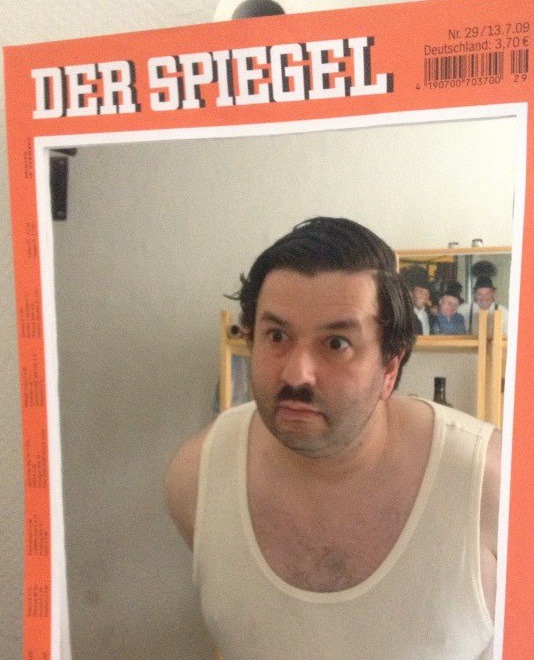 The song’s video features the schlubby “Adolf” – a sad fat man who wanders through a Berlin full of hostile Jews (played by K.I.Z.) and Arabs. Comic Oliver Polak, whom Heeb once christened “Germany’s Only Living Jewish Comedian“, plays the titular Führer. I asked Polak about playing Adolf in the video – he said that his own life isn’t too different from what you see here, apart from the mustache; His comedy consists of jokes about watching porn, pets and depression. In a way he’s the German Marc Maron, minus the obsession with Ernest Becker and Beat literature, plus a genuine reason to watch his weight. His Hitler, complete with a dirty wife-beater and greasy hair, might just be one for the ages, even if not quite in the same category as Lorenzo St. DuBois (But really – what is?)

To be honest, this Jew from Germany ain’t that impressed. When talking about the Third Reich and how best to remember it, Hitler-the-iconic-figure can be more of a distraction than a key to understanding and explaining things – even in satire. This could have been a great chance for a band with true hipster cred to address the tendency of young Germans who, rather than actually confronting history, make bad jokes instead. Rather, KIZ just end up becoming the thing they criticize – because ultimately there is nothing more comforting than breaking a taboo that isn’t really a taboo at all.