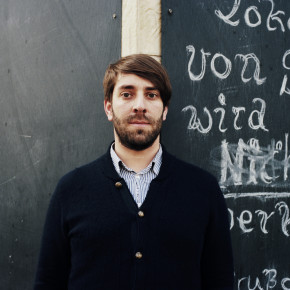 Americans may not know the name Daniel Erk, but in Germany (where seemingly everyone is a Hitler-expert) Daniel is the real deal. As a journalist, Erk wrote extensively on the use of Nazis and the Holocaust in pop culture, before publishing his first book “There’s Never Been So Much Hitler – Banalizing Evil or: Why we can’t get rid of the man with the little mustache” (A true friend of the Jews, Daniel devotes an entire chapter to praising Heeb.)

How many times have been asked whether it’s okay to make jokes about Hitler?

Virtually every time I get interviewed. When the media is preparing a program about everything from the historical anniversary of the so-called Machtergreifung to on-going Nazi problems in Germany to this book now, He’s here again, I get asked to give a statement, preferably in three sentences and under one minute.

How did you become one of those people who gets asked to comment on Hitler?

In contrast to what many people would expect from a German guy there was no master plan. At university I took a Communications class and did a presentation on “Humor about the Third Reich”. So I started a collection of things related to that which quickly grew. A friend of mine did an internship with the newspaper taz and asked me if I want to write a blog about that. Within weeks people started sending me stuff. It grew and grew to the point where I could write a book. In Germany, if you’ve written a book about something you are the expert.

Most people think it’s a new phenomenon, but it’s not. The first thing I found was from the early seventies. The satirical magazine Pardon sent an actor dressed as Hitler to the Frankfurt Book Fair to sign historical books on Hitler. It was a big scandal but mostly because people laughed immediately and weren’t offended. Since then it never stopped. There are waves, of course. In the eighties the satirical magazine Titanic reacted to the conservative government and the “Historikerstreit”. In the nineties there is a third wave of Hitler humor which comes from a new generation that is completely without respect and nonsensical. On the forefront was the German late night host Harald Schmidt who I thought was hilarious. Those weren’t jokes about history necessarily but about the commercialization. There was a spoof of TimeLife video documentaries that covered  things like “Who started the Second World War? Was it really the Germans?“ in this really dramatic announcer voice.

Maybe it’s my generation but I do feel there has been a rise in Nazi jokes in the last ten years.

I think it’s bigger and not as political. In the seventies they were highly political and aimed at the conservative elite who claimed that nobody knew anything. There was this strict idea behind it about what was good and what was bad. The more nonsensical stuff of the nineties opened the door for what we have to do, without any clear moral impetus. It’s like a go-to joke, like jokes about men and women. The book “He’s Here Again” is like that: Easily accessible, not elaborate, more like a cheap joke.

Okay, so the book. From what I understand it’s basically Rip Van Adolf: Hitler wakes up in 2011, without any explanation. He hasn’t aged and now walks around modern Germany.

He basically acts like someone from the Middle Ages. The humor of the book stems from the fact that Hitler is someone from a completely different time. Which is interesting because there are both perpetrators and victims that are still alive. It’s not long gone. But that’s the point the book makes: Here’s this guy that’s completely unrelated to the modern world and Germany. But I think that basic assumption is plainly wrong.

The author Timur Vermes goes to “Old man in the modern world” well very often – Hitler is puzzled by cars, or computers, or mobile phone. He tries to emulate the style and voice of “Mein Kampf” – long stilted sentences, strange metaphors, many of which involve wildlife. Which is interesting because it basically tries to spoof something that probably isn’t that known to people in Germany where “Mein Kampf” is banned.

But even there it falls flat because it tries to evoke how people think Hitler spoke. So it’s referring to a pop cultural idea of Hitler. It’s more like Hitler as a hand doll…

…like in that crazy-ass movie “Hitler – A Film from Germany” that Susan Sontag loved so much. Sorry, that connection just blew my mind. Anyway: So what sort of Hitler comedy would you like to see?

There are two versions – it’s either about pain and uncomfortable situations. Or you could make exactly the opposite, something that has no morals, no idea, except to make people laugh and make them feel comfortable about themselves.

So that book ultimately just wants to confirm people and their closed-off idea of history?

I think it probably started as a mediocre joke that suddenly got successful. It makes people comfortable. There’s a huge interest in history and Hitler and at the same time this reluctance to face the truth. People are obsessed with the question but don’t like the answers. So you end up with stupid answers. The book says it’s completely over, it’s far away. It has nothing to do with us. It’s over.