Gwyneth Paltrow Poses in This Month’s Vogue with Challah 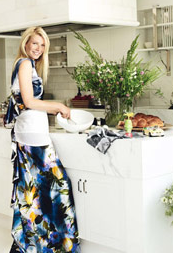 By now we know Gwyneth Paltrow has traded in her kale shakes for grilled cheese, but the half-Jewess is now channeling her inner balabusta in a soon to be released cookbook, My Father’s Daughter, featuring family-themed recipes which she says are inspired by her Long Island dad’s Jewish roots.

In this month’s Vogue, über -foodie Jeffrey Steingarten cooks with Paltrow (chicken and dumplings!) in a cover article featuring a food porn-worthy photo spread, including one shot of the beaming, apron-clad goddess standing next to a freshly baked challah. While Gwyneth isn’t the only celebrity bringing her star power to the food world, by citing her role models as Joan Nathan and Claudia Roden (the matriarchs of Jewish cuisine), the most unlikely of A-listers is joining a hallowed tradition. Pass the gribenes, Gwyneth.