Chosen Music: An Interview with Ari Picker of Lost in the Trees 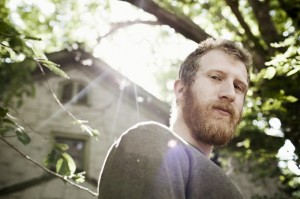 Most of us have that friend who loves classical music, not because he’s particularly anti-rock or 65 years-old, but because he loves the complexity and depth of the composition. At least that’s what he says. Said friend also usually loves to smoke weed and talk about the woodwinds section.

If you don’t know such a character, meet Ari Picker.

Notwithstanding about the weed (we didn’t ask), Picker and his band, Lost in the Trees, create a perfect synthesis of classical music and folk rock — mostly-acoustic, meditative story songs complete with a miniature orchestra. A few of the tracks on debut “All Alone in an Empty House,” out August 10, are classical-sounding instrumentals, dubbed movements. The rest, though, is heart-on-sleeve confessional folk, largely based on actual conversations from Picker’s childhood of his dueling parents. Bummer, but it sure sounds good.

North Carolina native Picker is also half-Jewish, but doesn’t count himself too Jewy. He talked to Heeb about the new record, geeking out over classical music and, um, church.

Some of your lyrics, especially in the album’s title track, are pretty bleak portrayals of family life. Are you storytelling, or is this a look at your history?
It’s all stuff that I remember from childhood — different themes I remember. My dad built this stone wall; there’s a line about that. There was an actual tower in the house I grew up in; there are lines about that. My father would go up there when he had arguments. It’s pretty literal, but I present it like you’re driving by it all quickly. It’s not linear storytelling, but peeking into different moments in our household.

What was it like being a Jewish kid in the South?
My parents weren’t practicing. We tried to celebrate Hanukah a few times but…Well, people made fun of my name a lot.
Your parents weren’t too into Jewish stuff and they named you Ari?  I think there’s a book called Exodus, and I think there’s a character named Ari (note: there is. Character’s name is Ari Ben Canaan, or Ari Son of Israel. Very subtle). I think my mom just liked the way it sounded.

Did you ever feel out of place?
I don’t think of myself as very Jewish. I definitely have a lot of Jewish blood in me, though, but my mom isn’t even Jewish, so I wasn’t really born into the church, or the faith. It wasn’t a huge part of my upbringing.

Who is the most badass classical composer?
Mahler is pretty badass. I think Berlioz is pretty badass. The “March to the Scaffold” movement (from Symphonie Fantastique)… I don’t know too many people who wouldn’t say that’s fucking badass. Beethoven, obviously; he’s pretty powerful. Rhythmic badassness. As far as intellectual, mathematical crazy genius, Bach certainly is that guy.

Why are young people averse to getting into orchestral music?
They might’ve had it rammed down their throats as kids. If you had to go to piano lessons or play in an orchestra every day growing up, you’ll hate it later on. I’m really drawn to the discipline that goes into that music, but that educational aspect of classical music would turn off some people. It’s also presented in this stale, upper class, Ritzy environment all the time. You see an orchestra play outside on July 4, and it’s so cheesy. But there a lot of badasses in classical music, and people would think it’s cool if they learned about it in the right context.

Are you more a composer or a songwriter?
The classical little sketches are like my first attempts; that’s my composer brain working. And the other music is my songwriter brain working. To compose, I have to lock myself in a room and not have any distractions. I break out all these books and read and study techniques. It’s not just picking up a guitar and singing whatever comes to me. A lot of people might think classical music is too heady, but I see people wanking on their guitars and taking solos… I hope people don’t think about classical like I think about that music.

If they do, what would you say to them?
Well, the next record will be more bombastic.