Chosen Books: Stretch: The Unlikely Making of a Yoga Dude 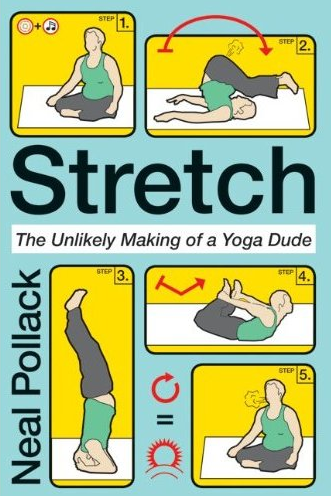 Stretch: The Unlikely Making of a Yoga Dude, Neal Pollack’s latest book, charts his rise from an angry, chicken-wing inhaling, burnt out writer and short-lived rock star to blithe, yoga fruitcakedom. Well, almost. Mercifully, Pollack held onto his beloved cynicism (and his love of pork), and after countless sun salutes, enough chanting to last a lifetime, and even a 24-hour yogathon, he’s emerged with a fresh memoir missing the usual trappings of yogi earnestness.

Of course, any yoga story with repeated references to Star Wars and other pop culture references vital to the upbringing of anyone pushing 40 today offers something different than the now ubiquitous yoga confessional. Nowhere is this more clear than when Pollack describes his first few months of classes, when, as a clueless novice, he failed to realize that it was a better idea to eat after yoga class than immediately before:

We grabbed our feet with our hands and rocked gently from side to side. This was happy baby pose. My body felt free and loose, totally relaxed in every way.
A murmur emanated from my guts, and an airy whoosh moved through my intestines.
I then uncorked the sloppiest, wettest fart of my life, a desperate five-second bleat of sweet relief. The sound seemed to bounce around the walls of the studio like a rubber ball thrown at maximum velocity. I followed this with a series of three little toots, duckling farts chasing after their mother.
“Oh, yeah,” Tanya said. “That’s it.”
My fart had been so strong that even my teacher felt relief. I quaked with humiliation and self-hatred.
“Oh my God,” I said. “I’m such a Jew.”

Pollack’s a hapless yoga entrant, prone to injuring himself (especially off the mat), and frequently tactless, like when he shouts, “BULLSHIT!” in response to a particularly patronizing pre-class ‘dharma lecture’ at Jivamukti in New York City. His normal state is stoned, and he relaxes in savasana (final relaxation pose) by contemplating his fantasy baseball team.

Yet this is where the book scores, because not all of us can be Elizabeth Gilbert—or her movie stand-in, Julia Roberts—resisting the urge to swat mosquitoes while sitting motionless for hours meditating at an Indian ashram. That said, I could easily see a scruffy Liev Schreiber playing the role of Neal in the Hollywood adaptation of Stretch.

Indeed, Pollack remains a charming enfant terrible as he winds his way along his yoga journey, critical and mocking of the industry’s pretensions (AcroYoga, anyone?), yet clearly enamored as he learns to tame his inner demons while mastering the chataranga jump back. Although Pollack claims he’s inspired by the many branches of the yoga tree to dabble in its forms and sample the many studios dotting the yoga haven otherwise known as Los Angeles, another motivation is painfully obvious: the introductory weekly special. A week of unlimited yoga classes at a bargain price even took Pollack, against his (and his wife’s) better judgment to sample the notorious Bikram yoga studio near his home, where the temperature is frequently set to above 105 degrees. Things get even hotter, and more infested, when he travels to Thailand in search of his higher calling. Just try not to laugh out loud when he describes the ‘downward facing yack’ pose he trademarked.

Is there greater meaning in all this searching? Perhaps. But when Pollack decides at the end of the book to begin to teach yoga, it comes as no surprise. We’ve already begun to learn from him.