Ai Weiwei Is A Matzah Man

This one comes to us from our friends at Paper Magazine: 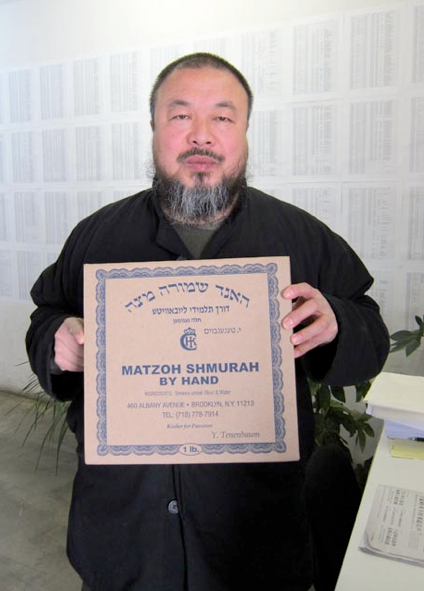 Image provided with permission from PAPER

Actually, according to Paper’s David Hershkovitz, the picture is a few years old, and comes from seder attended by Weiwei a few years ago. The photo is has only been published now, perfectly coinciding with tonight’s PEN American Center’s literary protest for free expression in China at the Brooklyn Library at Grand Army Plaza – a protest designed to put the spotlight on artistic repression in China ahead of the Brooklyn Museum’s upcoming Ai Weiwei exhibit, set to open right down the street from the library on April 18th.

Ai Weiwei cannot attend the retrospective of his work at the Brooklyn Museum because his passport is arbitrarily held by the Chinese government. […] But he is only the tip of China’s iceberg of artistic persecution. PEN’s protest rally brings our attention to others singled out by Beijing, including peaceful Uyghur rights advocate and economist IlhamTohti, the recipient of the PEN/Barbara Goldsmith Freedom to Write Award; Nobel Peace Prize Laureate Liu Xiaobo, who is serving an 11-year prison term; and Xiaobo’s wife, Liu Xia, an artist and poet who has been held under extralegal house arrest since her husband’s receipt of the prize. An outdoor projection of a never-before-seen video message from Ai Weiwei, accompanied by a lighted message to the Chinese government presented by the New York City Light Brigade, will be a highlight of the rally, which will also include readings of works by Chinese writers by Sergio De La Pava, Jennifer Egan, Chang-Rae Lee, Victoria Redel, Jacob Weisberg, and Ai Weiwei: Never Sorry filmmaker Alison Klayman.

For those of you who can’t make it to Grand Army Plaza tonight, the protest will be streaming live, as well. To learn more visit Papermag.com for details.

As Jews around the world prepare to celebrate their ancestral journey from bondage to freedom, it’s worth remembering that there are plenty of people out there still subject to oppression and suffering. So, yes, let my people go. And let all other people go, as well.

[h/t David, and many thanks to Paper]