In early 2002, the Anti-Defamation League called Heeb Magazine “offensive, counterproductive and infantile”–mind you, this was before an issue had even gone to press. During that period — and in early 2004 when the ADL condemned our “Crimes of Passion” photo spread as “blasphemous” — I thought long and hard about the ADL’s mission, its contemporary cultural meaning and the function of its leader, Abraham Foxman. To put it extremely politely, I felt that the ADL was a vestige from another era and out of touch with the interests, ideologies and ambivalences of young Jews today. To put it not so politely, I felt that the organization was opportunistically trying to bolster its own power and cultural relevance. Whenever I’ve thought about the ADL since then, I’ve gone back and forth between these points of view.

That’s why Yoav Shamir’s documentary Defamation, now on DVD, was of particular interest to me. In an effort to uncover the meaning of anti-Semitism today, Shamir gains remarkable access to Foxman and the ADL — providing a portrait of the organization consisting not of Machiavellian opportunism, but of confusion. For Shamir, they are a bunch of nebbishes with the best of intentions. One staff member complains about the organization’s annual budget of $70 million. When Shamir asks another for information about one of the 1,500 purported anti-Semitic incidents the ADL claims to investigate in the U.S. each year, another staff member scours an excel spreadsheet before citing a woman who recently called the organization after her employer wouldn’t let her out of work for Shavuot. Watching the ADL staff at work you forget that this is the one of the world’s leading organizations aimed at combating bigotry. This is a bunch of people trying to substantiate their paychecks. Think Milton in Office Space. 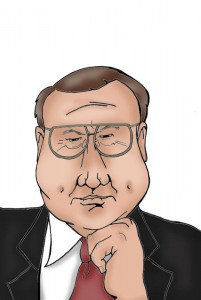 Foxman’s dramatic foil is the disgraced scholar Norman Finkelstein, whose 2000 book The Holocaust Industry made waves by accusing Jewish leaders of cynically exploiting the memory of the Holocaust for their own political benefits. According to Shamir, Foxman and Finkelstein have more in common than it would seem. While Foxman survived the Holocaust, Finkelstein is the child of survivors in a household in which the Holocaust was always a foreboding presence. Shamir told me over breakfast that each “are as traumatized as the other . . . each took the Holocaust experience to opposite extremes.”

Shamir’s expose on contemporary anti-Semitism also takes us on a trip to Auschwitz with a group of Israeli high school students who imagine themselves to be as hated as the Jews of the Polish past, to Russia, where an innocent man is stabbed in a synagogue by a lunatic who may or may not have had anti-Semitic motives, to Crown Heights where tensions between blacks and Jews simmer around an incident in which a Lubavitch school bus full of sleeping children was pelted with rocks, and to Rome where representatives of the Vatican kiss Foxman’s ring. What holds all of these scenes together is the sense of meaning that the experiences confer to Jews today–that being hated is what makes us special.

In the end, Shamir (the film’s narrator) concludes that “putting so much emphasis on the past, as horrific as it has been, is holding us back.” Shamir is not just some Jewish Michael Moore firing off conspiracy theories that anti-Semitism is one giant myth fostered by leaders like Foxman to perpetuate their own power—his point is much more nuanced and prickly. Defamation is a chilling, psychological portrait of a people who are unwittingly traumatized by the past in ways that they are not aware. “The worst thing you can say to a Jew is that he’s not being hated,” Shamir tells me. “They will get very upset with you.”