What Happens At A CULTURE WHORE Holiday Party

Naming your Chanukah party “Dick the Balls With Loads of Molly” sends a clear message: fuck Christmas. That was good enough to be a rallying cry for the Maccabees (basically), and it was good enough for The Culture Whore at their party at Loft 594 (co-produced by  I Give Good Hebrew and Descentart.com). Under the light of the menorah, traditional Yiddishkeit songs like “212” and “Some Dumb Super Slowed-Down Version of Gangnam Style” played on and on, letting celebrants engage in the proud traditions of the Jewish people, like doing coke while waiting for the bathroom ogling two shirtless guy who have tied themselves to a cross, for some reason. Maybe art? Yes. We’re now saying art was the reason they did that.

The night flitted between the DJs, the art projects, and musical acts without much care for specifics, because everyone was dancing at all times. Drag queens came in and out, for quick physical performances that at times felt like more like in a punk show then a dance party. Interactive art lined the walls, giant bizzaro holiday cards and unicorn hats begging to be touched. Cakes da Killa came out and got everything grinding with a fervid ferocity. People have been calling 2012 the year hip-hop turned queer, but the type of passion that was present in Cakes’ short set could only be fine tuned after years of practice. Same goes for his horniness: “Oh na na, I been thinking ‘bout dick”, he crooned, taking the mystery out of Frank Ocean’s hit. The room became much smaller as Cakes blew through his set. 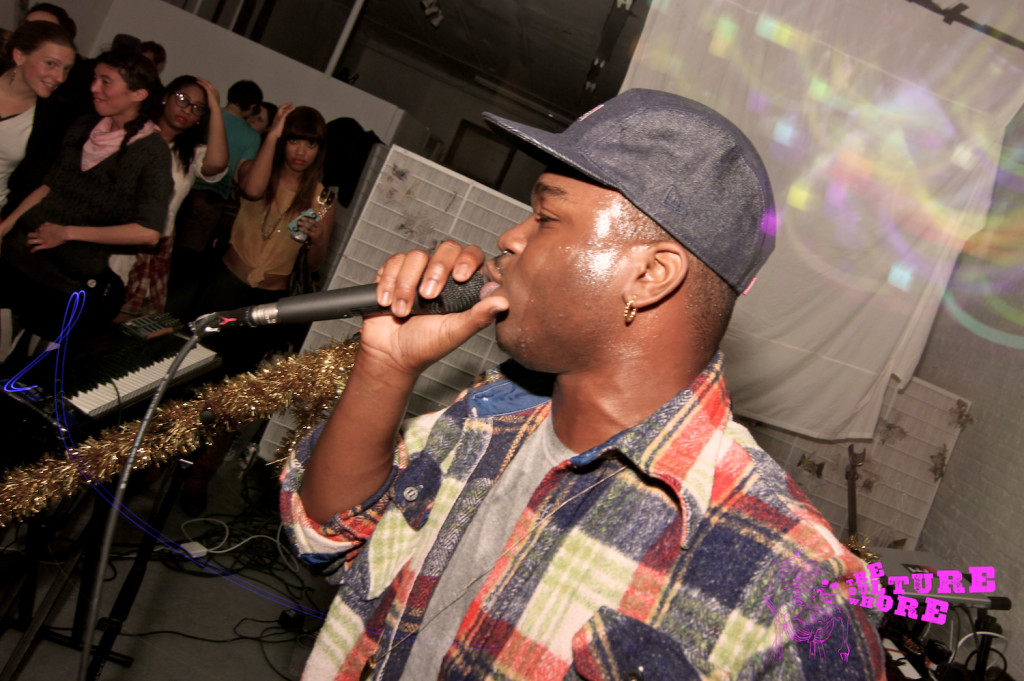 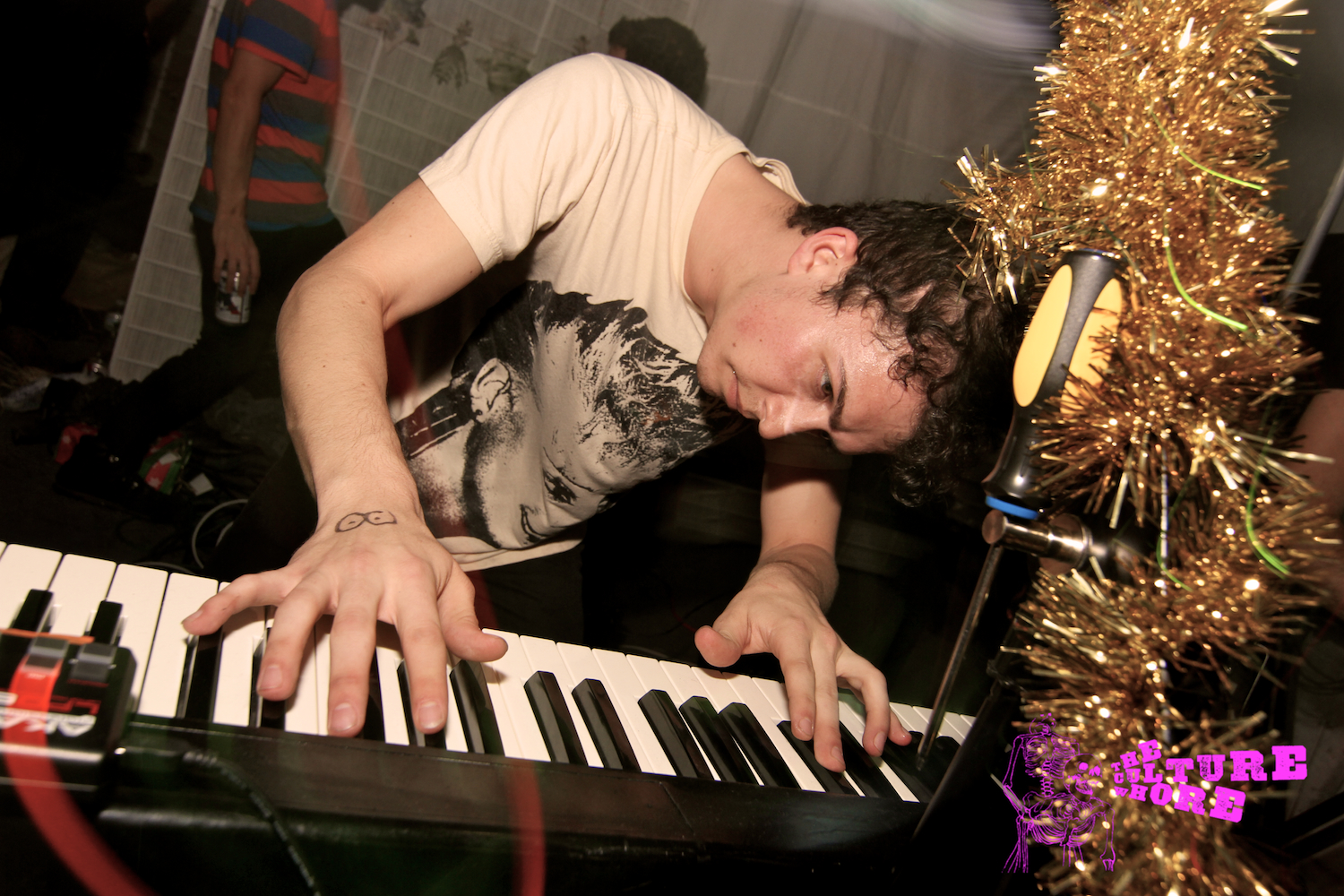 A few DJ sets later, Teen Commandments came out and kept the party going with a Beach House-meets-Twin Shadow vibe, light-as-air keyboards matched with a sexy guitar. What started as a dance party and transformed into a rap show and then back into a dance party had taken its final form— sweaty, smoky, drunken rock n’ roll. The Teen Commandments operated as if they had been the main attraction all along, seemlessly transitioning from one distinct party vibe to another: “there are no strangers, there are no angels, there is only us”, they sang, and the crowd readily agreed.

The night ended on a strikingly Chanukah-filled moment. Walking out with wooden crates attached to his feet and lights attached to his head, a singer (whose name I didn’t quite catch) came out around 4 AM, passing out glowsticks and screaming “You have the everlasting light!” He also mumbled some version of holiday songs, but the key was light. Finding light, creating light, making it your own, making it communal. At 4 AM, everyone left at Loft 594 was some combination of drunk, tired, and on several drugs. But they refused to leave until the music stopped, until they all had a glowstick of their own. Christmas had indeed been fucked. The Maccabees, if they hadn’t been a fundamentalist militia equivalent to a Taliban of the ancient world, would have been proud. 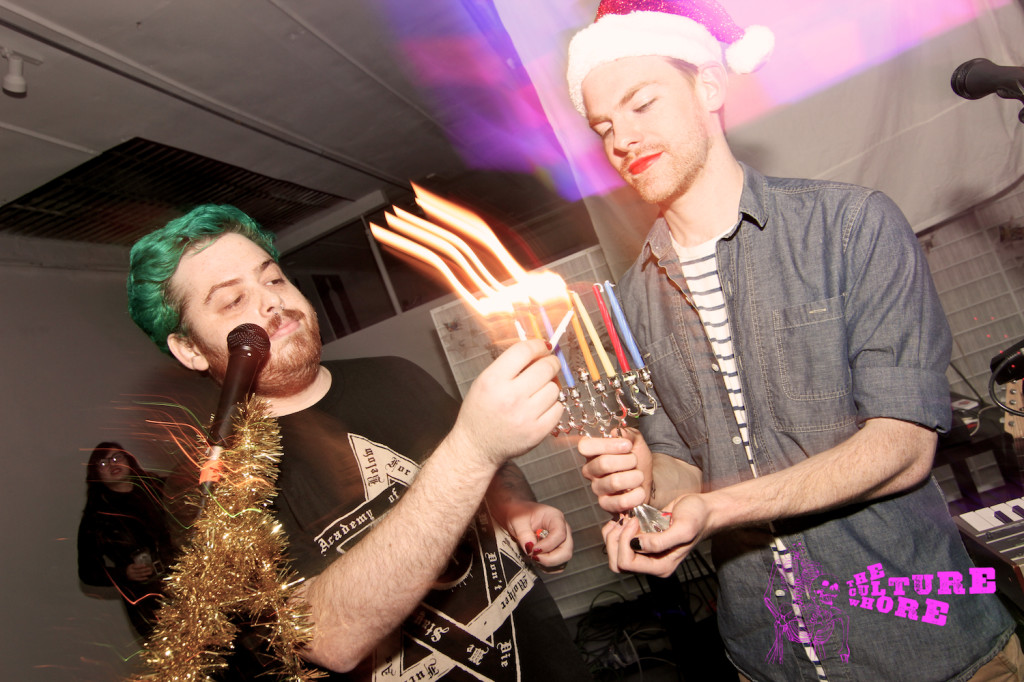