Vasquez from “Aliens” Chimes in on “Boobquake” 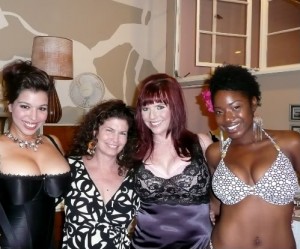 After an Iranian zealot started talking smack about cleavage causing earthquakes, Purdue co-ed Jennifer McCreight rebelled with her “Boobquake” assembly, but some are saying she proved the guy’s point. A 6.5 earthquake hit Taiwan the very same day her ladies let it all hang out.

With titty talk bulging out across the Net, Heeb asked actress Jenette Goldstein, better known as Vasquez from “Aliens,” to put in her two . . . cents. (These days Goldstein runs her own oversized bra shop in East Hollywood, and wears a 30G-cup herself — or didn’t you already know that from our extensive interview with the chesty thespian?)

As someone who can truly appreciate the, ahem, gravity of the situation, Goldstein surprisingly recognizes the milky, mammary, life-threatening truth. “At first I was skeptical about the cleric’s theory, as anti-woman, anti-science pronouncements from fundamentalist clerics come as no surprise to me . . . but facts are facts,” the actress-cum-lingerie dealer says. “Look for the opening of [new store] Jenette’s Burkhas in early 2011 . . . if Los Angeles hasn’t fallen into the ocean by then.”