Urban Kvetch: “You Don’t Have to be Jewish” 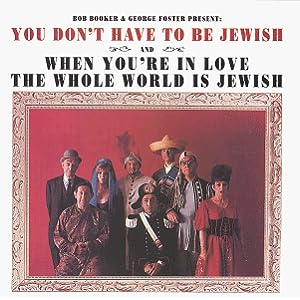 You Don’t Have to be Jewish
…to get heartburn from this record. Considering that Jackie Mason is currently on Broadway with his seventh one-man show, there’s no reason why this comedy relic from the last millennium boasting hackneyed sketches like “Divorce, Kosher Style” and “Secret Agent, James Bondstein” shouldn’t find an audience. But it instills a lot more oy than joy, and is primarily of interest as a pop culture curio. A series of quick comedy sketches written and produced by the admitted non-Jews Bob Booker and George Foster, it was so successful they produced a sequel, When You’re In Love The Whole World Is Jewish (a scary thought!) and both are available on one incredibly dense album. It’s worth a listen, but before you get started give thanks for Mel Brooks and make sure you have your Alka-Seltzer on hand.
RAVEN SNOOK