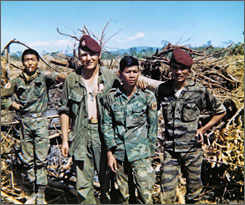 For reasons which will be made clear, Jewdar supports the nomination of Chuck Hagel to Defense, and would like to address some of the criticism that’s being directed at him from Je—I mean, from some segments of the “pro-Israel community.”  According to accounts, Hagel is an “antisemite” and “anti-Israel.”  Pretty big accusations to throw around in modern American politics.  What’s behind these allegations?

1.  Apparently, back in 1999, he was the only US senator not to sign a letter to Russian President Boris Yeltsin calling on him to combat Russian antisemitism.  Clearly, Hagel must have condoned, if not outright supported, antsemitism.  Except, it seems, that Hagel had, as a senator, this curious notion that it was the job of the executive, not the legislative, branch of the US government to conduct foreign relations.

2.  Back in 2008, in interview for a book on American relations in the Middle East, he said the following:

“The political reality is that … the Jewish lobby intimidates a lot of people up here.”

There are, in addition, various other odds and ends that people are throwing in, but those words seem to be the main crimes Hagel has allegedly committed against the Jewish people.

Let’s first deal with the “Jewish lobby” issue.  Leaving aside the fact that he later issued an apology and correction that it should have been “Israel lobby,” can we have a moment of intellectual honesty as American Jews?  How many of us–and Jewdar certainly has–have used words like “us” and “we” and “our” when referring to Israel?  The reality is that not only does Israel identify as “the Jewish state,” but many American Jews identify with Israel.  Not solely, not entirely, not to the exclusion of being Americans, but certainly, many of us do identify with Israel pretty strongly.  While there are non-Jews who are involved in Israel lobbying, is it really so absurd to consider this to be a “Jewish” matter?  Is AIPAC led by Christians or Jews?

Furthermore, if defenders of Israel are going to assert that every criticism of Israel is “antisemitic,” wouldn’t the logical corollary to that be that support for Israel is “Jewish?”

At the very least, Jewdar feels that given all the above, a goy from Nebraska can probably be forgiven for making a statement that there is a “Jewish lobby” lobbying on behalf of Israel.  As for the intimidation factor, well, duh.  That’s what lobbies are supposed to do.  It would be a pretty lousy lobby, whether Jewish or Israel, that didn’t intimidate legislators.  I think all those people who’ve given money to powerful lobbies AIPAC or the NRA would hope that they could intimidate legislators, and all those people who’ve given money to less powerful  groups like the Sierra Club wish they could.

As for his statement that he is a US, and not an Israeli senator, well, shouldn’t he be a US senator?  Would his current detractors be happy if he said that his foremost loyalties would be to Israel?  Some of them might be; Jewdar most definitely would not be.  If one looks at the basic gist of all the comments on Israel that he has made that his critics find so problematic, it is that while he supports Israel as a US ally, he does not support giving Israel carte blanche to do whatever its government wants.  Unfortunately, for many supposed supporters of Israel, that has become the standard of being “pro-Israel,” and anybody who suggests that Israeli leaders might be doing the wrong thing, or that America might sometimes have interests that don’t coincide with that of Israel’s leaders, is anti-Israel.  That’s unfortunate, and dangerous.  One quote that Hagel’s critics haven’t mentioned is this one:

That wasn’t said in regards to Israel, or to the attitude of some American Jews to Israel, but it may as well have been.  It is not the job of the Secretary of Defense to agree with every policy that Israel has.  It is the job of the Secretary of Defense to serve the interests of the United States, as expressed by acts passed by Congress, and–very importantly–the policies adopted by the Commander in Chief.  It’s funny that those who criticize Hagel for his comments about “senators from Israel” are essentially expecting senators to act like senators representing Israel by rejecting Hagel not because his inability to do the job, but because they don’t like his views on American-Israeli relations.  This is hardly unique to this issue–unfortunately, in recent decades, too many senators have forgotten that presidents are entitled to their appointments, and that the only issue senators should be addressing is whether a candidate is qualified, not whether or not they are ideologically acceptable to the individual senator.

As for his qualifications, Hagel certainly has the necessary government experience–and it’s funny how many Republican leaders were saying nice things about him before Obama started considering him for Defense.  He has also shown himself willing to place country and constitution above politics, and has a sufficiently nuanced view of the world to understand that there are times when military force is necessary, and times when it isn’t.  But from Jewdar’s perspective, what settles is the matter is that in addition to all of that, Hagel would be that rarest of rare breeds–a Secretary of Defense who was not just a combat infantryman (he’s picture above, second from left), but an enlisted man.  Speaking as a former grunt (peacetime, in Jewdar’s case), we think it’s about time that one of the people responsible for making decisions about soldiers understands what it means to be one.