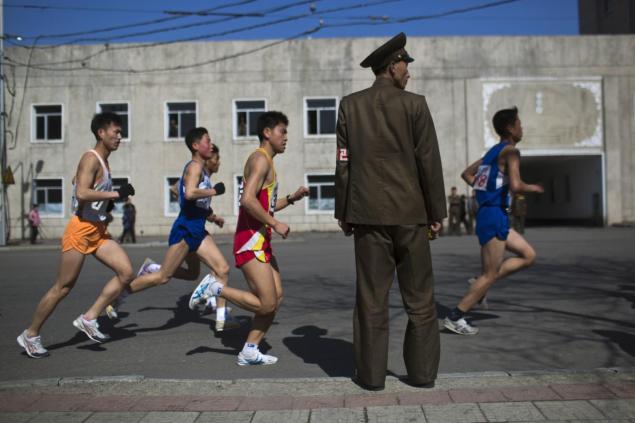 Being among other things, the Heeb Humor Editor, Jewdar is accustomed to people thinking that we’re making light of things, so please understand that we don’t find anything funny in the murder of several bystanders–including a child–at the Boston Marathon.  But while as per usual, our natural inclination when a bomb goes off in a public space is to presume the bomber probably has a guy named Muhammed in his immediate family,  something occurred to us.  We were flipping through the Daily News, and we saw that Kimg Jong Un was holding a marathon in Pyongyang to celebrate dynastic founder Kim Il Sung’s birthday.  Now, smart money of course is still on the Uslim-Mays, but there’s something about this whole set-up that seems like just the kind of crazy that Kim Jong Un might go for, as well as going in nicely with his recent saber rattling (and, quite frankly, there’s a part of us that feels that adherents to certain religions with more experience in such matters might have done a better job of things).  So who knows what the future may bring, but if you find that there’s a North Korean connection to this bombing, just remember you heard it from Heeb’s Military Affairs Editor first.