The Grinch Does it Again 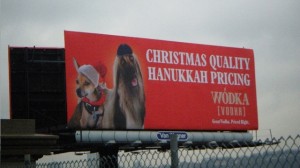 Jewdar is soooooo very excited. Even though we missed the memo, clearly, antisemitism has finally been eradicated from the world. We presume this must be the case, because the ADL, that stalwart opponent of all things anti-Jewish (and occasionally Heeb Magazine, but who’s paying attention), has turned his ire on a target so innocuous that we can only presume that all real threats to the Jews must clearly have been eliminated. What’s got the Jewish Justice League all a-twitter? Apparently, a vodka company, Wodka, put up the billboard featured above, which, if you can’t make it out, reads: Christmas Quality, Hanukkah Pricing.

While the Jewdars all found it pretty amusing, the ADL had this to say:

“In a crude and offensive way of trying to make a point that their vodka is high quality and inexpensive, the billboards evoke a Jewish holiday to imply something that is cheap and of lesser value when compared to the higher value of a Christian holiday. Particularly with the long history of anti-Semitic stereotypes about Jews and money, with the age-old notion that Jews are cheap, to use the Jewish holiday in dealing with issues of money is clearly insensitive and inappropriate.”

“Insensitive and inappropriate,” maybe, but “crude and offensive?” Give us a break. We’ll stick with “amusingly inappropriate.”  Wodka has announced they are taking down the sign, so we will be safe from any possible billboard induced pogroms this holiday season. Jewdar likes us some Polish vodka (even if we think quality definitely plummeted after 1939); while we haven’t had a chance to try Wodka yet, this is one Jew whom the ADL has made a fan.