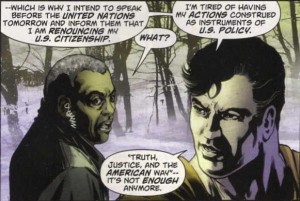 Although Jewdar loves us some comic books, we were never big Superman fans. Still, we respect the office. So we were none too pleased about the recent brouhaha over the Man of Steel’s alleged intentions to renounce his US citizenship and become a “citizen of the world.”

Now, let’s be honest here–he hasn’t actually renounced it, just expressed an intention to, and, we imagine, like many a comic book close call, everything will work out in the end.

Still, Jewdar’s principle is that if you’re going to be messing around with something as iconic as Superman, there’s got to be something more to it than just increasing sales.

And the thing is, if the writers wanted to do something timely and relevant and citizenship related, they could have come up with something a lot better, and more obvious, and more rational, because when all is said and done, Superman isn’t a US citizen. He’s a Kryptonian who crashed on Earth, and was raised by Jonathan and Martha Kent–good people, salt of the Earth, and normally, good Americans, but there does seem to be one violation of American law they helped facilitate. Because even leaving Superman aside, and focusing on alter-ego Clark Kent, he’s also not a US citizen.

Sure, Jonathan and Martha may have forged some papers, and Clark certainly goes about his business as a US citizen, but it’s only since 2000 that foreign children adopted abroad are granted automatic US citizenship (and we don’t know what to make of a foreign child who wasn’t adopted abroad, but simply showed up here and was then adopted). Not only is Superman not a US citizen, but he’s an illegal alien. Now there’s a storyline we’d like to see.