“Super Jew” Cosplay Kid Is Pretty Much The Best

Okay, okay, so the “Superheroes are Jewish!” trope is about as worn out as the Batman underroos I wore from ages 5-7 (not that everyone seems to realize the horse they’re beating has been dead for a looooong time). And “Super-Jew” apparel has been on the lamer end of the spectrum since Seth Rogen wore that thing in that movie no one saw.

All that being said, dammit if this kiddie cosplayer doesn’t put some of Jewish bloom back on that super-powered rose for me. 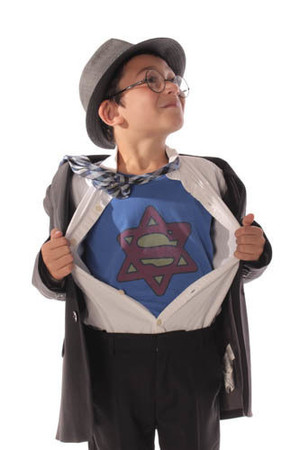 So I’m trying to help out my 10 year old son because I’m a proud dad. He decided to enter a Cosplay contest at FanExpo in Toronto this past weekend and he need[s] your help in getting votes. He thought he’d be a little creative and a have a little fun and go as Super Jew. We’d love your vote and kick the space marines [another cosplay contestant] butt.

And it’s not just space marines Super Jew has to watch out for. He’s in the running against some stiff competition, including a gender-swapped Luigi & Princess Peach, a bad-ass Judge Dredd, and a delightful pair of life-sized Legos.

So help this pint-sized pischer out, woncha? Toss him a vote, tell your friends, and take a stand for Truth, Justice, and the Heeb Magazine way!