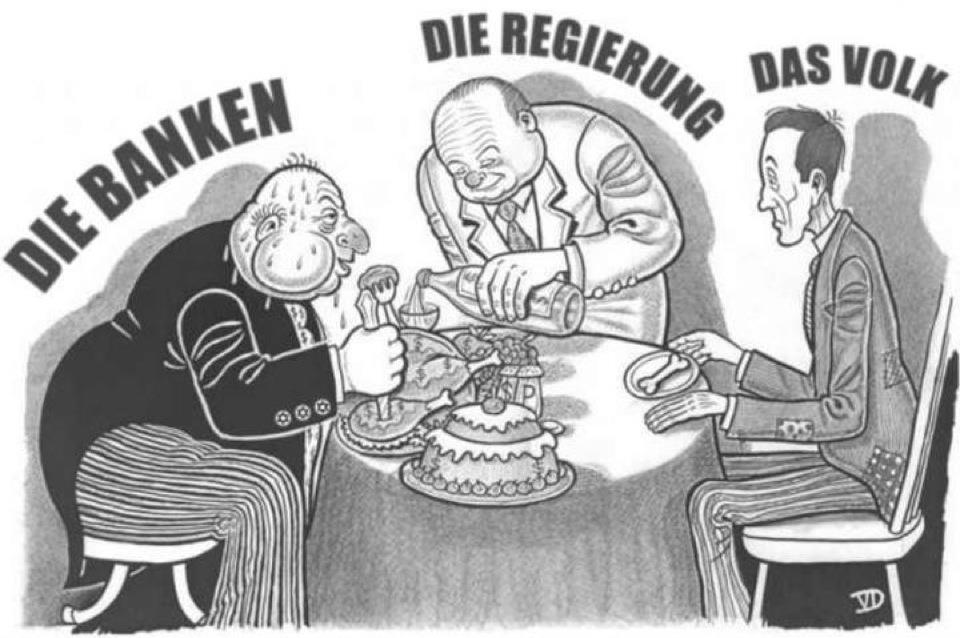 Austria, now there’s a strange country, I’ve always thought. Not just mean and boring like Germany, but genuinely weird and fucked up, from the movies of Michael Haneke and its literature to the proverbial Austrian morbidity: “Death must live in Vienna”, as the song goes.

It’s also a country that doesn’t hide its bigotry, that’s remarkably open about its aversions – mostly against everything that isn’t “Austrian”. Which is why the fact that a leading politician has published an unambiguously antisemitic cartoon isn’t really shocking. It’s Austria, after all.

Like most European states, the country saw a rise in right-wing populism and extremism in the nineties. Under its leader Jörg Haider, the FPÖ (the Freedom Party Austria) became the second most powerful party. Haider’s racism was frighteningly colorful. Never content with simply blaming “foreigners” for all of Austria’s problems, he picked out specific groups like “Slovaks”, “Croats” and “Africans” while never losing sight of his main goal: To keep Austria Austrian.

That, of course, included the occasional antisemitic jab against “the American East Coast” and the head of the Jewish Community in Vienna. Haider died in 2008 in a car crash. “Good news, Haider’s died!” is how my mother woke me up that day.

Haider had left the FPÖ in 2005 to lead his own splinter party. His successor is Heinz-Christian Strache – a former dental technician who might as well be a roided up used-car salesman. As a young man, Strache palled around with genuine Neo-Nazis and took part in paramilitary exercises. Under him, the FPÖ’s policies and rhetoric got even dumber and blunter. The party’s current motto is: “Our money for our folks”.

To reinforce this razor-sharp gem of sophisticated sloganeering, Strache posted a cartoon on Facebook – a haggard and hungry man (“the people”) sitting at a table with a fat man (“the banks”). The fat man is being served meat, cake and wine by the waiter (“the government”). The banker is hook-nosed and has cuff-links that quite possibly in the shape of the star of David.

Now, you might call that antisemitism. Strache and his party deny these accusations, of course. Strache sees himself as a friend of Israel and attended a conference “against Islamist terror” in Ashkelon in 2010, along with other prominent European populists. He obviously believes that Israel is his alibi Jew who can protect him from all accusations.

The FPÖ’s secretary has even gone further in his defense and said that to see a hook-nose as an antisemitic symbol is in itself antisemitism. Call it Rorschach-racism, or Colbert’s “I don’t see color”-routine played straight: If you see it, then there’s something wrong with *you*.

That’s bullshit, of course. The cartoon is actually a few years old. Only two things have been added: the hook-nose and the cufflinks. After numerous discussions about coded “Israel critique” and turf wars, the cartoon is almost a refreshing throwback to simpler times.

To a time that Austria would rather like to forget, actually. Before the Nazis, Vienna was of course the most Jewish place on earth (as can be seen in the highly underrated “A Dangerous Method”). After the war (and the death and expulsion of Austria’s greatest Jewish thinkers), the whole country was able to convince itself that it not only didn’t commit any crimes but was actually a victim – that the country didn’t want the Anschluss, the union with the Third Reich.

Austria’s postwar culture suppressed the topic of the Shoah even more than Germany did. By the same token, there was a return of Jewish culture to Austria– comedy, literature, films – by the early 50s. In the 70s, a Jew became chancellor, though statements like “If the Jews even are a people, they’re a rotten one” don’t exactly make out Bruno Kreisky to be a proud member of the tribe. Still, he never converted to Christianity.

Today, charges against Strache for “hate speech” have been filed. Fat Jew bankers with hook noses – this shit is old school.