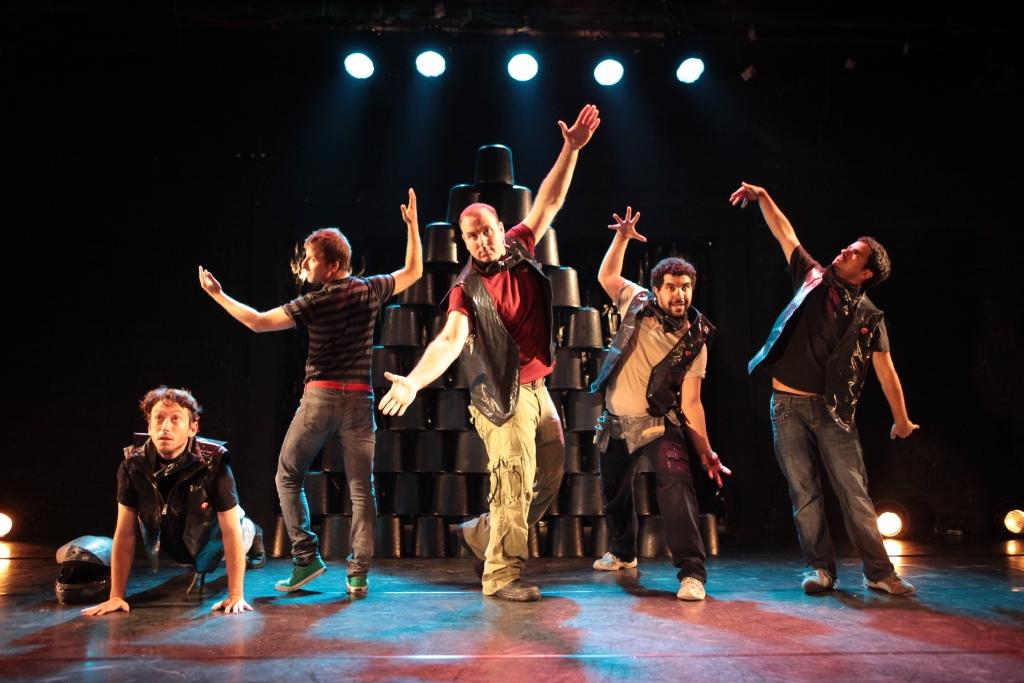 What happens to men left to their own devices, when these men are a mix of Arabs and Israelis, imbedded with years of resentment and hostility, when these men decide to stage a new version of Romeo and Juliet? According to TheatreCan, an Israeli production company who have brought DOGS to the New York Fringe Festival, they turn into…well, dogs. Not literally, though that might have made an alright play more interesting.

Branding itself as an “all-male Romeo and Juliet musical”, DOGS may be expected to be a light and fluffy piece of Israeli camp but it strives for something far deeper than that and, for some of it’s roughly ninety-minute runtime (about a half-hour too long), manages it.

The action of the play begins when two brothers, one of whom is gay, decided to stage Romeo and Juliet, reframing it as a way to express the Arab-Israeli conflict. Their cast, made up of friends, strangers and an Arab plumber, comes together in an explosion of what book writer Ido Bornstein describes as “sweaty, passionate Israeli manhood.” There are classic Hebrew songs updated with jazz-handy choreography (the actors give it their all but none of them are dancers), barely repressed sexual tension between some of the fighting men and, somewhat strangely, a male pregnancy. It is, at times, a bit of a mess, but mostly the play’s commitment to exploring it’s themes makes up for the confusion created by it’s storyline and translation.

DOGS has been running in Israel for over a year, and is the culmination of years of artistic partnership between Bornstein and director Shlomo Plessner, a married gay couple who are the veritable embodiment of manliness. It’s possibly this dichotomy that led them to create DOGS, which uses a premise that could have been outlandish as an interesting way to examine the Arab-Israeli conflict and Israeli masculinity. In DOGS, the shadow of femininity hovers over every word and gesture as these men try to find a way to relate to each other without the soft and forgiving buffer of women.

The actors have done an admirable job readying the work for an American audience, many of whom may not understand the intricacies of a play about Israeli life. Several of the actors have merely memorized the English lines phonetically (you can easily tell which ones and it is a bit distracting at times), but others took the time to ensure that they knew what every word meant so that they could deliver it with the same gravity as they would in Hebrew.

The whole process of creating the play has been a struggle, Borstein says. “The production started out as an actors workshop of Jewish and Arab men. As the rehearsals moved forward the tensions between the men became more and more intense. The actors’ way to cope with the intimacy demanded by the play was continuous homophobic humor, which ended up being part of the play. For example, one of the actors, a devout Muslim, refused to kiss his Israeli partner, as required by the play until the opening night. This was our intention, actually, to get the actors to a boiling point, so they can overcome their political views by getting hot and sweaty with each other. Fighting and making love sometimes look alike.”