From Rock And Roll to The Rapture: Why Punk Pioneer Andy Shernoff Is Fascinated With The End Times

I grew up Jewish in New York City where nobody believes Jesus is returning to earth. The only time I heard anybody mention the “second coming” was when I passed through the old, seedy Times Square as a kid and listened to itinerant preachers lambasting the drug addicts and prostitutes “to repent because the end is nigh.” I dismissed it as the ranting of lunatics but today we are living in an age of extraordinary delusion. There are powerful people in the United States who believe the return of Jesus and the subsequent apocalypse is not only imminent but desirable … and the scariest part is; some want to be President. 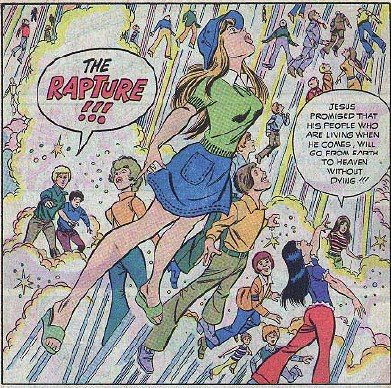 I was totally oblivious to end times prophecy until I discovered the evangelical Christian revenge fantasy known as “the rapture”. Fascinated, I spent hours visiting websites like RaptureReady.com, which answers pressing questions like, Will the Antichrist be of Jewish descent? The deeper I dug the weirder it got. Ambiguous, unrelated passages in the bible were strung together to create a narrative that Jesus would reappear on Earth once certain pre-conditions are met. The scenario goes something like this. First, the Jews return to Israel (done), they resettle their “biblical lands” (working on it), after which they rebuild the third Jewish temple on the site currently occupied by the Muslim holy sites Dome of the Rock and the al-Aqsa mosque (minor inconvenience). This will trigger a seven-year period of satanic upheaval during which Jesus will descend from the heavens, “rise up” the true believers to meet him in the sky while the unbelievers remain on Earth to suffer under a reign of terror overseen by the Antichrist.

Fringe thinking?…. Not really, a 2010 Pew Research poll revealed that 41% of Americans believe that Jesus Christ definitely (23%) or probably (18%) will have returned to earth by the year 2050. Then there is the Left Behind book series, a “fictionalized” account of the rapture which has sold over 63 million copies, spawning movies and video games to place Christian eschatology firmly in the mainstream of religious thought.

This has led to a bizarre, symbiotic relationship between evangelicals and Israel. Evangelicals support Israel to accelerate the arrival of Jesus knowing full well that most of the Jews will be slaughtered in the bloodbath that follows His return. Meanwhile Israel plays along with the wacky, apocalyptic fantasies of the Christian fundamentalists to ensure continued financial support for Israel from evangelicals and Congress.

The main player in this absurd dance is Christians United For Israel, the largest pro-Israel organization in America. Founded by controversial pastor John Hagee, (“Hitler was expediting Gods will”) they boast of 1.6 million members. Hagee plays down any connection between his organization’s support for Israel and his desire to bring on the end times but the two are inexorably linked. He exhorts his followers to “become a part of Biblical Prophecy” by supplying money to “return Jewish families to their homeland.” (Cornerstone Church Magazine September/October 2006) This translates to financial support for the crazed, renegade settlers on the West Bank in an attempt to destabilize a tenuous situation. He also uses his big time political connections to reject any two-state peace initiatives between Israel and the Palestinians as all the land must belong to Israel before Jesus returns. Speakers at the CUFI’s annual Washington/Israel Summit have included power players like Israeli Prime Minister Benjamin Netanyahu, former House Majority Leader Tom DeLay, Senator Ted Cruz and Governor Mike Huckabee. 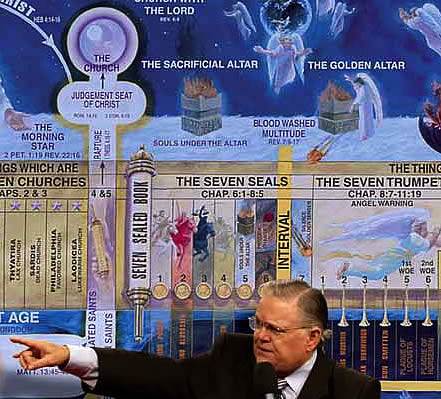 John Hagee and his rapture charts

I began to contemplate the larger role faith plays in our country. Faith as Mark Twain said “is believin’ something you know ain’t so”, yet somehow it maintains a privileged position in society. Politicians proudly wear their “faith” on their sleeves and entertainers credit it for their success. This lack of critical thinking and intellectual laziness allows a person to believe any feel good, mumbo jumbo without the slightest shred of evidence. So God picks Grammy winners, death leads to paradise and the President was born in Kenya. Faith is not a pathway to truth and faith is not a virtue.

All this kooky stuff got my songwriter antenna twitching. I felt there was a great song waiting to be written in that mishugas.  I had the phrase Jewish zombie rolling around my brain and really liked how provocative it was, so I used that as a starting point. I then researched Christian eschatology extensively because I wanted every line to accurately reflect what these knuckleheads actually believe. I probably wrote 25 verses until I settled on the right balance of truth, drama and sarcasm. The finished song  Are You Ready To Rapture?  is available online and – warning! cheap plug ahead– on my new EP, “On The First Day, Man Created God”

So where does that leave us now?  With a cornucopia of crazy! The nutty preachers I used to mock in Times Square now influence Congress. The leaders we elect to keep us safe, fan the flames of conflict and advocate for ignorance. Politicians kowtow to a constituency that believe people can fly, the dead will rise, the Antichrist lives in the White House and God’s chosen people will burn in a lake of fire when the Jewish zombie returns.