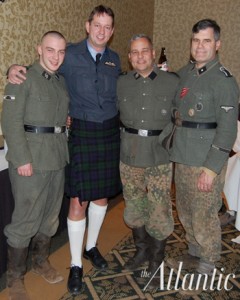 Jewdar admits it–we absosmurfly loooooooooove election years. When this one began, we confess, it was looking pretty grim for the Democrats, what with them completely screwing up as usual. Thankfully, if we can count on the Dems to put forth a bunch of out-of-touch milquetoasts as candidates, we can count on the Republicans to run a bunch of nut-jobs. In a year with competition like Carl Paladino and Christine O’Donnell, you really need to work to stand out.

Thus, Jewdar has to give mad props to Ohio congressional candidate Rich Iott (above, between red ribbon guy and kilt guy). As many know, Iott has a curious hobby–playing Waffen-SS dress-up. Now, we’re willing to concede that one might have this hobby and not be a Nazi-sympathizer( and we can’t help but feel that this all could have been avoided had he simply dressed up in the uniform of a certain American military committed to defending a regime built on racial superiority) but certainly, at the point at which the pictures of you in SS drag are bouncing around the internet, life being what it is, it’s really up to you to prove that you’re really just a closet leather queen.

So far, Iott hasn’t been doing a great job of damage control, and has been reduced to having his Jewish friend (Richard Gabai, producer/director of such as hits as Assault of the Party Nerds II) speak on his behalf on his website. Sorry, Rich, but a picture is worth a thousand words, and there are a lot of those pictures out there. But don’t worry, Jewdar, as a WWII-obsessed history nerd (albeit one who plays games where he gets to kill Nazis, and who, you know, enlisted in an actual army), we are not unsympathetic, and we have a solution. Iott has said that he’s not a Nazi, but “I’ve always been fascinated by the fact that here was a relatively small country that from a strictly military point of view accomplished incredible things….” 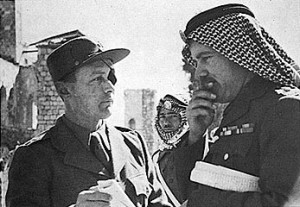 Okay, Rich, time to put your money where your mouth is. You like playing dress up, and paying tribute to small countries that perform great military feats? We think it’s time you set up Ohio’s first group of Arab-Israeli war reenactors. What could please your Jewish constituents better and prove your pro-Israel bonafides more than a bunch of pictures of you reenacting the battle forJerusalem? Just remember, though–you should be the one in the eyepatch, not the kaffiyeh.