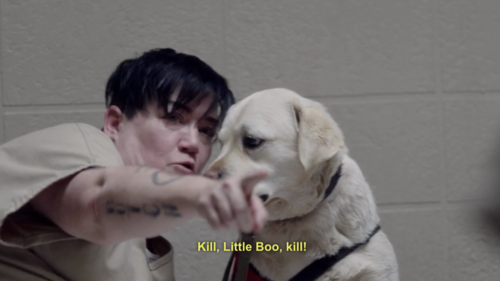 For as much as you want to hate Orange Is The New Black actress Lea DeLaria’s “Big Boo” character for being a scheming, double-crossing pot stirrer, you’ve gotta love DeLaria herself for getting right up in the face of an allegedly homophobic bible thumper on a NYC subway car.

“This isn’t Sodom and Gomorra. Not even Sodom and Gomorra is Sodom and Gomorra.” exclaims DeLaria, as she argues with one of the MTA’s itinerant train-preachers, having first lead her entire subway car in a rousing rendition of “99 Bottles of Beer on the Wall” to drown out his message of biblical doom and gloom. Explains the anonymous tipster who sent in the following videos to Gothamist:

I walked onto the F train at W4 station and they were already yelling. And when I got off two stops later at 23rd street, they were still going. A lot of people were standing around taking videos and photos and watching. I think people weren’t sure whether it was real or staged. But a friend later confirmed that she has seen this same man preaching similar things on the subway before, so I’m pretty sure it was real.

For those strap-hangers who bury their heads in their iPads rather than have to deal with whatever crazies make it onto the F train with them, watching DeLaria lock horns with an evidently well-known subway preacher is pure cathartic bliss. “Bad Jew” my ass! Lea, I’d love to join you for your next subway singalong. You bring the progressive politics, I’ll bring the 99 bottles of beer.