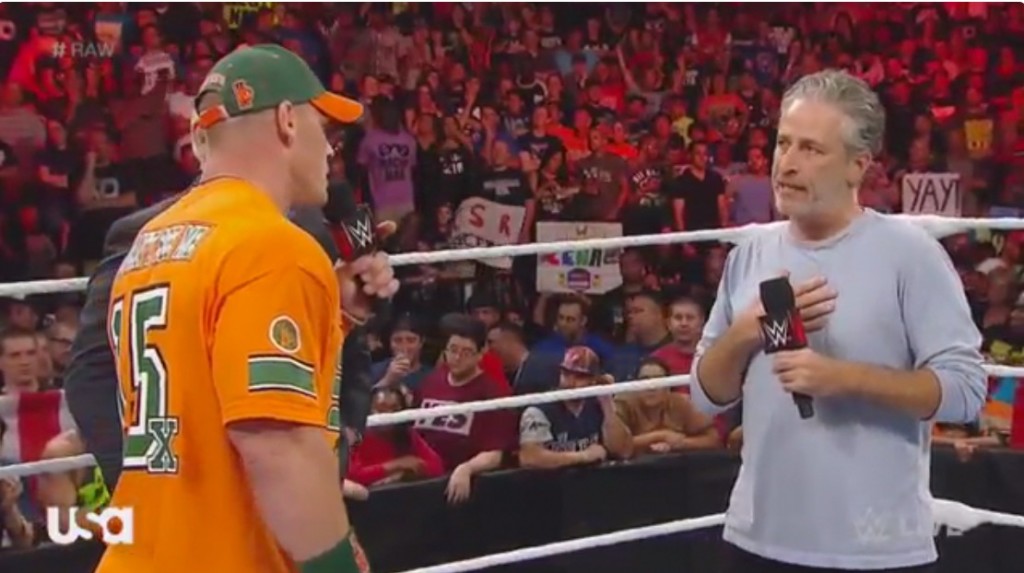 Look, I’ll be the first to admit, I was kind of digging this new Stewart-less landscape, where I knew I could wake up every morning, and not have to see hyperbolic headlines screaming about whatever fuck-up or foible Jon had “TOTALLY DESTROYED” during the previous night’s Daily Show. That said, when Stewart went heel this weekend, during his run as WWE Summerslam announcer… Well, who doesn’t love the idea that some wiseass yid known mostly for slinging zingers from behind a desk could also have the beitzim to pick up a chair, and slam it directly into the washboard gut of John Cena, one wrestling’s biggest goody-two-shoes, thereby ensuring the title belt would go to Seth Rollins?

Not bad, Leibowitz. But of course, what goes up must, necessarily, come down (or, put it another way: That shit just don’t fly in the ring). And so, not 24 hours later, Stewart returned to the WWE, this time on Monday Night RAW, to explain just why he handed the title match to Rollins, the comedian’s kayfabe nemesis. The answer: Had John Cena won the match, he would have tied the Nature Boy, Ric Flair, for all time world championship wins, and that, felt Stewart, was simply not acceptable. “I had to do it!” Jon explained to both Flair, and Cena, who joined the former Daily Show host in the ring to hear his explanation for the entirely unexpected chair shot. And then, in that same spirit of “I had to do it!”, John Cena responded in kind:

DOWN GOES STEWART! (with just a hint of butt-crack)  I guess it’s just nice to know that, after a career spent “DESTROYING,” “DEMOLISHING,” and “ABSOLUTELY CRUSHING,” comedy routines from behind his Daily Show desk, Jon Stewart is mensch enough to get, as good as he gives.