There was a time when one could walk up to NY Comic Con while it was going on, and get a ticket.  Now, if you don’t get them online in the first couple of days, you’re screwed.  Part of that, of course, is the growing popularity of the genre; part of it is the fact that Comic Con is about a lot more than just comics.  For the purist (and perhaps those who wax nostalgic about old cons before they got fat and famous) there is Special Edition, also run by Reedpop, an annual convention (this is the second year) that’s actually about comics.  Of course, that doesn’t meant it doesn’t have a few fun additions, like the guys at Rocket Pop (above) who make awesome art-deco style travel posters for places like Metropolis, Hogwarts, Endor, or any odd comic/sci-fi/fantasy place you can think of (Jewdar picked up Gotham City).  But it does mean that pound for pound, while you may have less stuff, more of it will be comic related, like Danny Fingeroth (below), long time comic writer, editor, and all round know-it-all (he’s pictured with Disguised as Clark Kent, his book about Jews and comics) 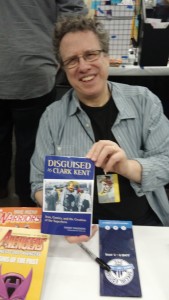 If we Jewdar has one criticism, it’s that we could have used even more used comic sellers, since cheap comics is what we are all about.  Still, if you can find another comic con where we can pick up copy of Judenhass (Cerberus creator Dave Sim’s exploration of Jew hatred) for 2 bucks, tell us where it is. 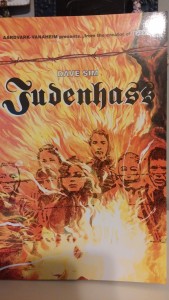 Until then, Reedpop, we belong to you.  See in you October at Comic Con.