G.I. Joe may have his kung-fu grip, and Transformers may be “robots in disguise” but when it comes to action figure features, it’s tough to beat Adolf Hitler’s “Sieg Heil” adjustable arm. It was one of these rare Hitler toys – along with an accompanying Eva Braun figurine, Nazi HQ play-set, and brownshirt paramilitary pieces – that was recently auctioned for a combined price of nearly $11,000. 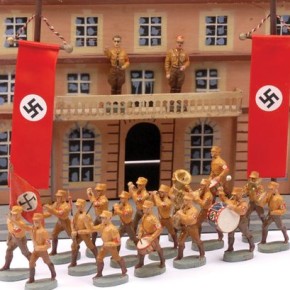 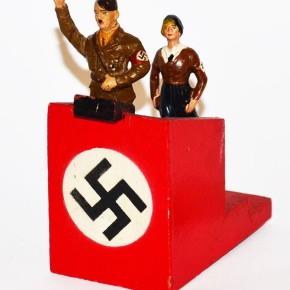 As reported by the Mirror:

The rare models – including one of Eva Braun, a set of Nazi paramilitaries and a wooden HQ – were produced from 1935 to 1944.

The figures were made out of sawdust and plaster but were delicate and few have survived.

The Hitler collection sold for £5,801 at Aston’s in Dudley, West Midlands, while the HQ set went for £1,202 at Vectis Auctions, Stockton-on-Tees, Co Durham.

Chris Aston said: “It was propaganda, getting children involved and into the Hitler Youth.”

Suffice it to say, this is one toy line Michael Bay won’t be rebooting into a film franchise anytime soon.