England’s Channel 4 has landed in a bit of hot water over their latest hit: “Jewish Mum Of The Year“. Some critics have taken offense at the “Survivor”-style competition, in which eight “Mums” are challenged to do typically Jewish mother tasks, such as organize a Bar Mitzvah and find a date for a single 29 year old. (Upcoming challenges will presumably include “Not Being Mad, Just Disappointed” and “Wiping That Little Bit Of Shmutz Off Your Cheek Even Though You’re 32″) 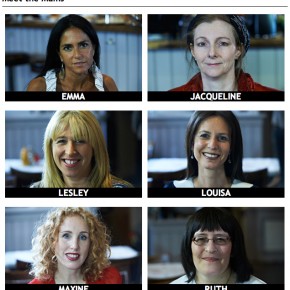 British actress Maureen Lipman (Recognizable to us uncivilized Americans for her cameo in National Lampoon’s European Vacation) voiced her opposition to The Daily Telegraph:

“It is very damaging, with anti-Semitism being what it is. Not to mention that being a Jewish mother is nothing like the way they portray it.
“It is just the next stage in this culture of humiliation on television, and I think it is appalling.

The winning Mum will be awarded, among other things, a column in England’s The Jewish News newspaper, with whom the show is partnered. The panel of judges includes columnist Tracy-Ann Oberman (yeah, we had to wikipedia her too) and Yiddish Scholar/Bruce Vilanch look-alike/Amazing Beard have-er Dovid Katz.

It appears, though, that the charges of inviting anti-semitism hasn’t dampened audience enthusiasm for the show, whose website features recipes for chopped liver and “Jewish Chicken Soup” (As if there’s any other kind) and a glossary of yiddish and Hebrew terms.

Judging from what we’ve seen of the show, we’re already looking forward to next season’s inevitable spin-off: “This Is Why I Go To Therapy, Mum!”