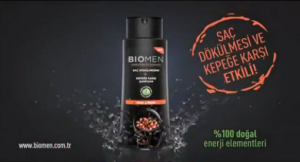 Jews everywhere are rallying against a Turkish company who made the incredibly ill-advised decision to use a clip of Adolph Hitler in a commercial. What exactly was Hitler hocking, you ask? A new, updated version of Mein Kampf? A documentary about the horrors of WWII? Classic military boots for the discerning fashionista?

Nope. It was shampoo.

Biomen shampoo, to be exact. the ad features a wildly gesticulating Hitler giving an impassioned speech. The clever people at Biomen wrote captions that exclaim that the product is a “a 100 percent male shampoo”, asserting that “If you are not wearing a woman’s dress, you should not use her shampoo either.”

Watch the commercial below:

The Turkish Jewish Community are in an uproar over this and have demanded that the commercial be pulled from TV, saying in a statement that “It’s totally unacceptable to make use of Hitler, the most striking example of cruelty and savagery.” The American Anti-Defamation League (ADL), led by National Director Abraham H. Foxman, a professional Holocaust survivor, released a statement decrying Biomen for re-appropriating Hitler, “who was responsible for the mass murder of six million Jews and millions of others in the Holocaust to sell shampoo is a disgusting and deplorable marketing ploy.”

One of my pressing questions: Who thought that this was a good idea? What jackass at Biomen pitched this concept? What executive okayed it? Did no one think that there was a possibility that someone might take offense to watching a commercial featuring the arguably most vile and evil monster ever born? I bet they blame it on interns.

This commercial is clearly a disgusting, reprehensible gimmick and it needs to go away ASAP…but there is one pressing question first: was Hitler even known for having good hair?