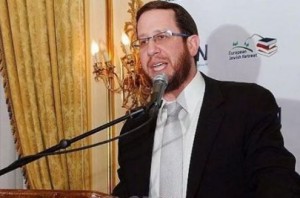 A rabbi in England is protesting the legalization of gay marriage–

Wait. Before I even discuss this: There is a rabbi in England? There are Jews in England? How does one explain the country’s utter lack of edible food (besides digestive biscuits?) I digress…

Rabbi Yitzchak Schochet, an adviser to England’s Chief Rabbi (a position I believe to be completely fabricated) has voiced his staunch opposition to a government plan to legalize gay unions in the UK. In Schochet’s opinion, this quest for equality is “pure politics,” a detriment to “traditional values.” This makes complete sense. Most gay Brits who want to marry their lifelong partners spend all of their free time plotting the destruction of the nuclear family when they have free time between picking their ass-less chaps up from the dry cleaners and molesting children.

Rabbi Schochet makes the following point in an attempt to seem intellectual rather than homophobic: it’s hypocritical for the government to impose their “secular” agenda (marriage equality) on a religious institution (marriage), while condemning religious leaders from making a religious judgment (opposition to gay marriage) on the same secular agenda. He would be completely right if marriage was, in fact, a religious institution and not a right enjoyed by every human being.

Schochet of course felt the need to pat himself on the back for his synagogue’s inclusiveness. At Mill Hill in North London, the rabbi proclaims, they gladly welcome homosexuals. But he still believes that allowing his gay congregants to marry would “run counter to the fundamentals of our beliefs”. What a lovely welcome for new gay members. We’re so happy to have you at our service, but don’t ask us to marry you because you’re disgusting.

The rabbi is joined in his opposition by Lord Singh, head of the Network of Sikh Organisations. In his opinion, not only is the legalization of gay marriage an offense against his faith, it’s  completely unnecessary: “It’s being changed and for no real gain because the law rightly gives every respect to a civil partnership. It is more of a sideways assault on religion, that ‘we can dilute your beliefs and values,’ and I find that concerning.”

This is one of the most frequently made arguments by those who oppose gay marriage. You can already get a civil union; why does it matter? And the answer will be, every time, Because we shouldn’t have to accept civil unions. We should be afforded the same rights and institutions that every human being enjoys. And do you really want to deny the world the glory of gay weddings? Think about the hors d’oeuvres!

Rabbi Scochet’s argument comes down to his faith. He asserts that, “The hallmark of Judaism is the family. The traditional family – a husband, a wife and children.” “Ultimately, of course,” Schochet admits, “it’s not for me to dictate to government and start telling them what to do. I can just simply decry what is going on on the basis of what I consider to be, from a religious biblical perspective, an assault on religious values.”

Decry away. Those of us who believe in equality will be here to challenge–and mock–you when you do.